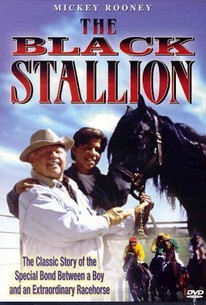 Experience the magic of author Carroll Ballard's timeless tale all over again as screen star Mickey Rooney returns to the role that earned him his fourth Academy Award nomination, and follow the further adventures of the Black Stallion as based on Walter Farley's continuation of the series. Veteran horse trainer Henry Dailey (Rooney) sees boundless potential in young jockey Alec Ramsay (Richard Ian Cox), and as the two prepare to take Black Stallion to France to race in the Prix de Chantilly, an unforeseen tragedy forces Alec's French friend Nicole (Marianne Filali) to abandon the race in favor of caring for her ailing mother. As Alec and Henry prepare for the Prix de Chantilly, their situation is complicated by a series of shady businessmen and devious gamblers who are desperately attempting to fix the race. ~ Jason Buchanan, Rovi

Critic Reviews for The Black Stallion

There are no critic reviews yet for The Black Stallion. Keep checking Rotten Tomatoes for updates!

Audience Reviews for The Black Stallion

There are no featured audience reviews yet. Click the link below to see what others say about The Black Stallion!