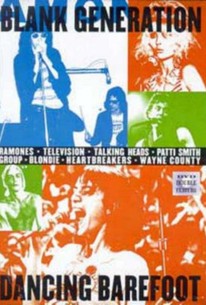 In 1976, Ivan Kral was a Czech exile who was struggling to make a name for himself as musician and filmmaker when he joined the Patti Smith Group and became friendly with underground filmmaker Amos Poe. Poe and Kral were both interested in the punk rock scene that was just beginning to emerge in New York City at venues like CBGB and Max's Kansas City, and they began bringing cameras to shows, shooting silent footage of bands who were beginning to develop potent reputations in the rock underground, including Talking Heads, Blondie, the Ramones, the Heartbreakers, and of course, the Patti Smith Group. Poe and Kral married their silent footage with live tapes or demo recordings of the bands (most of whom had yet to release a record) to create a deliberately rough audio-visual record of the burgeoning punk scene. The result, Blank Generation, is a fascinating bit of musical archeology, preserving for the ages the earliest moments of what would become one of the most important and influential movements in the history of rock & roll.

Tom Petty and the Heartbreakers

Critic Reviews for The Blank Generation

If you're interested in the era, it's an invaluable time capsule.

There are no featured reviews for The Blank Generation at this time.