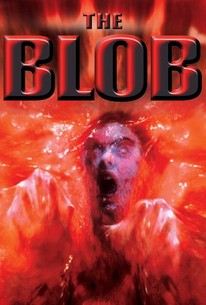 Critics Consensus: The Blob can't replicate the B-movie charms of the original, though its fast pace and gory thrills pack enough of a punch to make it a worthwhile update.

Critic Consensus: The Blob can't replicate the B-movie charms of the original, though its fast pace and gory thrills pack enough of a punch to make it a worthwhile update.

After the phenomenal box-office and critical success of David Cronenberg's 1986 remake of The Fly, a series of big-budget remakes of '50s horror favorites rode in on its coattails in the late 1980s -- though none managed to rise above mere camp clones of their elders, albeit garnished with modern makeup effects in an attempt to draw modern teen horror-junkies. One remake that managed to live up to its cheesy inspiration was Chuck Russell's version of The Blob, in which the title goo crashes to earth and promptly begins digesting the residents of a small California town while growing to gargantuan proportions. The clean-cut teen hero originally portrayed by Steve McQueen (his first starring role) is replaced here with a rebellious outsider (Kevin Dillon) whose preppie rival (Donovan Leitch) for the affections of the cute heroine (Shawnee Smith) is quickly eliminated by the all-consuming space-gelatin. No sooner has the plasma menace set up house in the town sewers when a shadowy government Blob Squad shows up under the direction of the grandfatherly Dr. Meddows (Joe Seneca), to clean up the mess... or not. This high-spirited remake replaces the '50s "Daddy-O" conventions of the original with '80s cynicism -- not even likeable characters are spared from the slaughter -- and anti-government sentiment. It also pushes the gore envelope in ways unavailable to its low-budget parent -- e.g. the scene in which one victim is sucked through a sink drain was only hinted at in the 1958 film, but here viewers are treated to the entire bone-crunching ordeal. Though the quality of blob effects seems inversely proportional to the creature's size (some of the climactic "wall-of-blob" footage is painfully cheap-looking), the end result is more blob for the monster-movie fan's dollar.

Bill Moseley
as Soldier #2
View All

News & Interviews for The Blob

View All The Blob News

Critic Reviews for The Blob

Stunning practical effects work, a great story with great characters, and a huge sense of fun, it's a shame that The Blob doesn't have as big of a following as it should have.

All we get is sullen Kevin Dillon subbing for Steve and a bigger, nastier lump that bloodies up its victims in stomach-churning close-ups.

A marvel of practical effects and gore, The Blob is the rare remake that surpasses the original.

After Invasion of the Body Snatchers, The Thing, and The Fly demonstrated that classic 1950s fantasy flicks could be reconfigured in new and exciting ways, The Blob took a step backward, offering gorier effects but little else to absorb.

'The Blob' manages to be above average. [Full Review in Spanish]

The effects are better, the deaths are gorier, but ultimately the film lack's the original's sincere charm.

An underrated and gory gem, The Blob deserves its place among '80s horror films to be remembered, and to slide back onto screens decades later after it originally crash landed into theaters.

An old story retold with a fresh voice, eager to make improvements where they're needed and unwilling to tamper with scenes that don't.

Audience Reviews for The Blob

Chuck Russell's remake of The Blob is one of those rare films that reinvents the formula of the original and makes it more horrifying. The 1958 version of the film will always be a horror classic, but this version amps up the stakes quite a bit by having better, more disturbing special effects, which add so much to the film's atmosphere. I very much enjoyed the film, and I think the fans of the original film will also enjoy this newer version. As far as remakes are concerned, this is among the better ones. When done right, an update can actually be very good and that's the case about The Blob. The cast do a fine job with the material, and director Chuck Russell clearly has an understanding on how to create a truly entertaining, disturbing and very memorable horror film. The effects are clearly the highlight of the film and there are enough demented scenes that will appeal to monster film fans. This is a very well done picture that is sure to appeal to diehard horror hounds and it's definitely entertaining from start to finish. Chuck Russell has pulled off a great remake that is among the best that I've seen. Be prepared for some serious blob carnage as the giant mass eats and attacks its prey. From a technical standpoint, this version looks better, but in terms of story, the original will always be the one to watch. Enjoyable and areal delight for fans, if you come across The Blob, give it a shot, you're sure to have a blast. This is among the best films in the genre of the late 80's and it most certainly is a memorable picture to watch and enjoy. As a remake, this one does what so many other reimagining's have failed to do, revise the story and incorporate a very good cast with plenty of thrills to give the fans something worth seeing.

80's camp with wonderfully stereotypical characters. Not nearly as good as the original but has it's own cheesy charm.

This remake of the 50's cult classic was a very enjoyable thrill-ride of a movie - and a surprisingly gory one too! The gore effects are superb and the Blob creature has been brought to life as effectively as it could be for an 80's movie without being too cheesy. In my eyes it deservedly earns a spot on a list of best horror movie remakes next to the likes of Carpenter's 'The Thing' and Cronenberg's 'The Fly'.

Why it reminds me of "Planet Terror", I'm not really sure. Perhaps it's the evil scientists, perhaps it's over-the-top style. Whatever the case, the similarity in style is quite striking. Story-wise, it's pretty faithful to the 1958 version, although it wants to put a little more of an edge on things. Maybe the tag line should be "It's not your father's blob" (then again, maybe not). Donovan Leitch plays the jock (a role played by Steve McQueen in the original), and Kevin Dillon plays the motorcycle-riding bad boy (a character not found in the original), and it's clear who the film-makers favor. While he may be a bad boy, he's a nice guy at heart, even when it comes to the town goody-two shoes cheerleader (Shawnee Smith). Much like the original, a meteorite crashes in the woods outside of town and when an old man finds it, a blob-like substance attaches itself to his arm. The two upstanding young highschool students rush the old man off to the hospital, but by the time they figure out what they're dealing with, it's too late. The blob grows bigger with each victim it consumes. And speaking of Grindhouse, Eli Roth must've been paying tribute to this film with his "Thanksgiving Day" short. There's a specific scene where two high school students are parked at make-out point that's hilariously reminiscent of said scene. Maybe this re-make isn't going to make anyone's "must see" list, but it's a fun little horror gem from the 80s never the less.