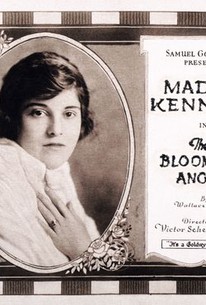 When mischievous Floss Brannon (Madge Kennedy) gets expelled from college, her aunt (Vera Lewis) tries to marry her off to an attorney (B.F. Blinn). Instead, she weds a poor student, Chester Framm (Pat O'Malley). There is no way they can live on his meager salary, so she invents a face cream which she calls Angel Bloom. The problem is: How to advertise it? So Floss hires an elephant from the circus, paints it pink (just like the cream), and has Chester -- whose ambition is to be an orator -- make a speech about her product while seated on the animal. Naturally, the whole situation is disastrous, but Floss manages to make her cream a success nevertheless, and she also convinces Chester to forget about oratory. ~ Janiss Garza, Rovi

Critic Reviews for The Blooming Angel

It is far-fetched to the point of absurdity, but it is also thoroughly amusing.

There are no featured reviews for The Blooming Angel at this time.