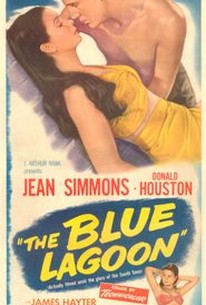 Henry Devere Stacpoole's lyrical novel The Blue Lagoon was rather chastely filmed in 1921. The 1949 remake is a tad more explicit, though it's hardly as racy as the 1980 Brooke Shields version. Two British children, Emmeline (Susan Stranks) and Michael (Peter Jones), are shipwrecked on a tropical island in the company of kindly old salt Paddy Button (Noel Purcell). Eventually, Paddy dies, leaving Emmeline and Michael, now attractively grown up and played by Jean Simmons and Donald Houston, all alone. Their relationship, more along the lines of brother and sister in their youth, blossoms into love, and then passion. Emmeline has a baby, and the two live as common-law husband and wife, content in their solitude..until.. Filmed in lush Technicolor, The Blue Lagoon was considered fairly exotic and somewhat risque back in 1949, though by current standards the film is a model of decorum.

Susan Stranks
as Emmeline as a child

Peter Jones
as Michael as a child

Critic Reviews for The Blue Lagoon

It is, in fact, rather charming.

The innocent approach to 1949's LAGOON works better when viewed as an alternative or balance to the less restricted remake.

Audience Reviews for The Blue Lagoon

Sweet tempered take on the material with much better acting than the more recent remake. Jean Simmons is so very young and beautiful.