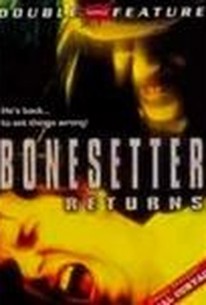 The direct-to-video Canadian slasher picture Bonesetter Returns borrows a premise similar to that of the original Nightmare on Elm Street. Years prior to the outset of the story, the child murderer of the title came ever so close to meeting his end at the hands of a group of bloodthirsty farmers -- but not before he used black magic to ensure his reappearance, decades later. The Bonesetter initially attempts to resurface in bodily form by sacrificing a small child -- but when a young man named Kyle (played by the fim's writer-director Brett Kelly) prevents this, he unwittingly sets the stage for a gut-wrenching showdown between the supernatural captor and his prey. ~ Nathan Southern, Rovi

Brett Kelly (I)
as Kyle Addison

Critic Reviews for The Bonesetter Returns

There are no critic reviews yet for The Bonesetter Returns. Keep checking Rotten Tomatoes for updates!

There are no featured reviews for The Bonesetter Returns at this time.