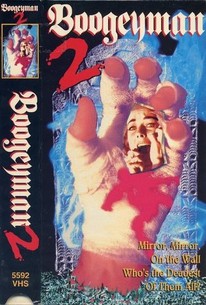 As a sequel to the first Boogey Man, the horror of Boogey Man II lies in the script itself which adapts so much of the footage from its predecessor that this is really a half a movie in one. A fragment of the "possessed" mirror that caused the damage in the Boogey Man is brought to Los Angeles by the heroine Lacey (Suzanna Love) and takes over a hapless butler. He goes on a rampage, but then other appliances get into the spirit of the thing, as animated garden hoses, corkscrews, electric toothbrushes, and hedge trimmers wreak havoc with the "house appliance" horror genre. In-between the madness, Mickey Lombard (Ulli Lommel -- the director playing a director) lambasts Hollywood for pandering to commercialism -- a case of someone biting the hand that is not feeding him. For the record, the term "boogeymen" comes from the Bugi men of Indonesia, feared pirates of the high seas.

Critic Reviews for The Boogeyman II

There are no critic reviews yet for The Boogeyman II. Keep checking Rotten Tomatoes for updates!

Audience Reviews for The Boogeyman II

There are no featured audience reviews yet. Click the link below to see what others say about The Boogeyman II!