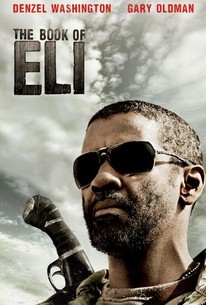 Critics Consensus: It's certainly uneven, and many viewers will find that its reach exceeds its grasp, but The Book of Eli finds the Hughes brothers injecting some fresh stylish fun into the kind of post-apocalyptic wasteland filmgoers have seen more than enough of lately.

Critics Consensus: It's certainly uneven, and many viewers will find that its reach exceeds its grasp, but The Book of Eli finds the Hughes brothers injecting some fresh stylish fun into the kind of post-apocalyptic wasteland filmgoers have seen more than enough of lately.

Critic Consensus: It's certainly uneven, and many viewers will find that its reach exceeds its grasp, but The Book of Eli finds the Hughes brothers injecting some fresh stylish fun into the kind of post-apocalyptic wasteland filmgoers have seen more than enough of lately.

The Book of Eli Photos

In a post-apocalyptic America where the once-picturesque countryside has become a desolate and violent wasteland, one man (Denzel Washington) fights to protect that sacred tome that could hold the key to the survival of the human race in this futuristic thriller from filmmaking duo Albert and Allen Hughes (From Hell and Dead Presidents). Gary Oldman, Mila Kunis, and Ray Stevenson co-star in the Warner Bros. production. ~ Jason Buchanan, Rovi

Edward A. Duran
as Town Thug

Critic Reviews for The Book of Eli

This picture is one big waste of time, including that of the actors and those in the audience who pay to see it.

The Book Of Eli is just one hot mess with choppy biblical undertones... The filmmakers just tried to get too deep with something that was not fully developed.

Post-apocalypse films are a dime a dozen, so what makes The Book of Eli so different? Not much, except an evangelical subplot that is not strong enough to be this film's savior.

The Hughes brothers' film feels more vibrant than the bleak Road, which was launched at us in November. Here the brothers show us the horror but somehow the staid and calm Denzel feels more approachable than the distraught and scrambling Viggo.

While the whole film looks like its aesthetic was cobbled together from some as-yet-unreleased Resident Evil game, the action scenes look like they're all filmed with the know-nothing grace of the nerds who create the movie interludes in video games.

Having to put your brain on cruise control to appreciate a movie is never a good sign, but in this film's case, letting yourself go for two hours is well worth it.

Not since Man On Fire have we seen the Oscar-winning actor kick this much butt.

It may have been more effective with a bit more action and a tad less philosophy and without its series of false endings and while it may be filled with thought provoking ideas it doesn't feel well enough thought out to work as a whole.

Though it cleverly blends genres and grabs interesting concepts from other films, it doesn't really offer anything entirely new.

Washington does what he can as Eli.

More a stylishly violent samurai western than an insightful comment on the human condition. Which will be perfectly fine by action fans.

[A] visually stunning, thought-provoking film that features a mesmerising performance from Denzel Washington at its heart.

Audience Reviews for The Book of Eli

Some will kill to have it. He will kill to protect it. Saw it again! Great Movie! This movie really gets into the religious side of life and it shows how many people lose faith in each other, with others, and towards god especially meanwhile there's others too that do whatever it takes to defend there faith no mattter what. There's a clear message behind this movie even though it's kinda harsh and rebellious but the movie really delivers and demonstrate how even though people are how they are they can change with a book and a little faith. Eli (Denzel Washington) has been on a journey for 30 years, walking west across America after a cataclysmic war that turned the earth into a total wasteland. The world has become a lawless civilization where people must kill or be killed. The barren roads belong to gangs of cutthroats who rob and kill for water, a pair of shoes, a lighter, or just for fun. Eli is a peaceful man who only acts in self defense, and becomes a warrior with unbelievable killing skills when he is challenged. After the war and the "Big Flash", Eli was guided by a higher power to a hidden book and given the task of protecting the book and taking it to its final destination. Eli guards the book with his life, because he knows that the book is the only hope that humanity has for its future.

A lone traveller through the post-apocalyptic wastelands of the United States is pursued by the ruler of a ramshackle society who believes a book he carries is the key to expanding his empire. The Book Of Eli is basically a western done in the style of The Road. It contains the usual mix of desolate wastelands populated by Mad Max wannabes shot through high contrast filters, punctuated with occasional bursts of violence to keep the multiplex audiences in their seats in good time for the Hughes brothers to deliver their aimless sermon about the meaning of the word of God. Or something. Eli's book is a slightly clunky metaphor for organised religion and the idea of a malevolent ruler intending to use it to control the population for his own nefarious purposes is actually quite an interesting one. Unfortunately the script is wishy washy and unfocussed, preferring a weak "twist" to any meaningful conclusion leading to the film petering out to a whimper. The superior cast certainly keep it watchable for its duration but the disappointing "finale" makes it all seem empty and pointless. In the end the Hughes brothers aimed for Mad Max Plus and ended up with The Postman 2.

A post apocalyptic hell with plenty of faith thrown in. Good action sequences and the books twist at the end made me smile.

The Book of Eli Quotes