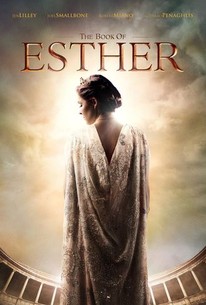 The Book of Esther Photos

Director David A.R> White brings the biblical book of Ester to the screen in this epic tale of heroism. King Xerxes is on the quest for a new queen when he meets Ester, and takes her as his bride. Meanwhile, Ester's cousin Mordecai and the villainous Haman scheme to manipulate King Xerxes and gain control of the kingdom. Later, when Ester discovers Haman's secret plan to bring about the genocide of the Jews, she risks her own life to show King Xerxes the truth, and save her people from a terrible fate. ~ Jason Buchanan, Rovi

Critic Reviews for The Book of Esther

There are no critic reviews yet for The Book of Esther. Keep checking Rotten Tomatoes for updates!

Audience Reviews for The Book of Esther

As a Historian of Art and Archaeologist who had a special interest in Bible Archaeology, I really wanted to see what the end result of this movie is. The Book of Esther is a book in the Ketuvim ("writings"), the third section of the Jewish Tanakh (the Hebrew Bible) and is part of the Christian Old Testament. It tells the story of a Jewish girl named Hadassah and Esther. Esther became queen of Persia and thwarted a plan to commit genocide against her people. Inspiring story, definitely, and I was expecting an inspiring film, as well. [img]http://images.static-bluray.com/movies/covers/66351_large.jpg[/img] What I got was a B-grade Biblical movie with no zeal, no chemistry, bad acting, screenplay which had no inspiration or feel for a good dialogue and a directing by David A. R. White which reminded me on school plays for Christmas! If I have to look for a positive thing in this movie, I could find few minor things, and the only reason I stayed until the end is the actual background story - I wanted to see how much spirit this film crew can take out of it! I admit I was angry. Jen Lilley was Queen Esther and even when she tried the hardest that wasn't enough to be convincible. Joel Smallbone as King Xerxes was pathetic, and Thaao Penghlis as Haman reminded me on 1940's with his style of acting. The only brighter star was Robert Miano as Mordecai but do not get carried away - just enough to be mentioned as an actor. Why cannot those religious zealots find real professionals who can make an inspirational movie with passion and love... like they do not know those words at all?! It seems that the highest passion in real life of the actors appearing in this movie was to fake an orgasm, because they seemed incapable of anything close to the real thing. If you want to watch a movie which can be described with one word - lame, you found a perfect choice!

The Book of Esther Quotes