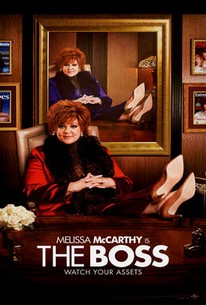 Critics Consensus: Melissa McCarthy remains as fiercely talented as ever, but her efforts aren't enough to prop up the baggy mess of inconsistent gags and tissue-thin writing that brings down The Boss.

Critics Consensus: Melissa McCarthy remains as fiercely talented as ever, but her efforts aren't enough to prop up the baggy mess of inconsistent gags and tissue-thin writing that brings down The Boss.

Critic Consensus: Melissa McCarthy remains as fiercely talented as ever, but her efforts aren't enough to prop up the baggy mess of inconsistent gags and tissue-thin writing that brings down The Boss.

Academy Award (R)-nominated star Melissa McCarthy (Bridesmaids, The Heat, Tammy) headlines The Boss as a titan of industry who is sent to prison after she's caught for insider trading. When she emerges ready to rebrand herself as America's latest sweetheart, not everyone she screwed over is so quick to forgive and forget. McCarthy is joined in The Boss by an all-star cast led by Kristen Bell, Peter Dinklage and Kathy Bates. Directed by Ben Falcone (Tammy), the comedy is based on an original character created by McCarthy and written by McCarthy and Falcone alongside their Groundlings collaborator, Steve Mallory. The film is produced by McCarthy and Falcone through their On the Day productions and Will Ferrell, Adam McKay and Chris Henchy through their Gary Sanchez Productions.

Gayle King
as as Herself

Parker Allen
as Darlings at Fight

Devon Li
as Darlings at Fight

Dr. Sharon Morris May
as Prison Guard
View All

News & Interviews for The Boss

View All The Boss News

Critic Reviews for The Boss

While there's plenty about The Boss to appreciate, I'm just not certain there's a great deal to like.

There's something irrepressible about McCarthy's shtick. Her foul-mouthed rants are always amusing, even when they're not quite laugh-out-loud funny.

The Boss is sketch comedy, with none of the lines colored in.

The confidently modest McCarthy creates her own happy endings. Make a date with this woman and you'll TF it's Friday.

Racks up enough laughs to justify the ticket price.

Look, I love Melissa McCarthy -- she is a truly gifted comic actress -- and I want to love her films. So she should stop making bad ones! It's bumming me out!

Falcone and McCarthy have landed somewhere in between and, with jokes as good as these, that's good enough.

The plot comes together discordantly, with flashbacks and transitions so ineffective they appear as if pilfered from different films.

An affinity for Melissa McCarthy's comedic stylings will determine your level of patience with understanding why The Boss seemed like a good outfit for her usual shenanigans.

At its funniest when McCarthy takes a gag and wrings every possible laugh out of it.

Making your protagonist a greedy CEO is a hard obstacle to overcome.

Audience Reviews for The Boss

Fans of Melissa Mccarthy will enjoy this ridiculous but highly amusing movie!

It's almost as if the weight of the entire film rested on lead McCarthy and despite her array of zingers and antics that make for some edgy laughs it becomes an exhausting endeavor even for her shoulders. When stripped of this, the Boss lies naked as another comedy with a forgettable story. There are parts of the premise that set up laughs that stand out (the Girl Scout brawl for one) but despite solid performances from even the supporting cast there are too many thrown-together storytelling elements that inhibit the film from breaking the mold of it's genre.

Pretty lame. A few funny parts, but bloody hell, those turtlenecks! I get the joke, but I wanted to rip them off her every scene.

Beginning with a slight nod to recent headlines involving the over-the-top antics of the rich and famous, this slight riff never rises above skit-on-SNL level, despite the talents of the participants involved. The best bit? An all out girl-on-girl scout gang fight, which alone should justify your time.