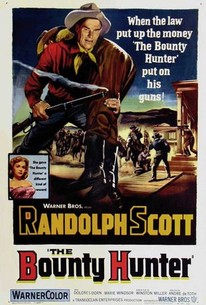 Randolph Scott once more contributes mightily to Warner Bros.' annual box-office gross in the well-mounted western The Bounty Hunter. Filmed in 3D but released "flat", the film casts Scott as the title character, who is hired by the Pinkertons to bring in three train robbers. Riding into the town of Twin Forks, Scott quickly ascertains that the outlaws are hiding somewhere in the vicinity. He then bides his time, hoping that the crooks will tip their hands, lead him to the stolen money, and let down their guard long enough to allow for a speedy capture. Scott's leading ladies on this trip are Dolores Dorn as the daughter of the town doctor, and Marie Windsor as the postmistress with Something To Hide. ~ Hal Erickson, Rovi

Critic Reviews for The Bounty Hunter

Audience Reviews for The Bounty Hunter

There are no featured audience reviews yet. Click the link below to see what others say about The Bounty Hunter!