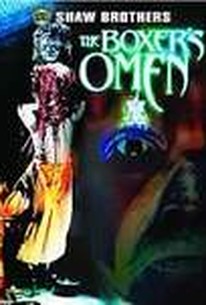 The director of Killer Snakes returns to terrify viewers with this tale of a fallen boxer whose quest for an omen with the power to break a long-running family curse leads to an action filmed adventure through a horrific land of nightmares and death. When the punches start flying and the creatures of the underworld come out to play, the battle is on to defeat the powers of evil, and free his family from the evil hex that binds them. Bolo Yeung and Lung Wei Wang star in a classic supernatural martial arts film from the prolific Shaw Brothers. ~ Jason Buchanan, Rovi

There are no critic reviews yet for The Boxer's Omen (Mo). Keep checking Rotten Tomatoes for updates!

This movie has everything, and more! It is truly proof that there is a kind, loving God who loves me very much. In a perfect world this movie would be playing in the multiplexes all the time. My zombie army would make sure of it. This amazing film has kung-fu, monsters, black magic, amazing cineamtography, a serious side dealing with buddism and more audacity than any film I've seen. It's like The Holy Mountain, Shaw Brothers style, and that is a huge compliment. See it as fast as you can.