The Boy with Green Hair1948 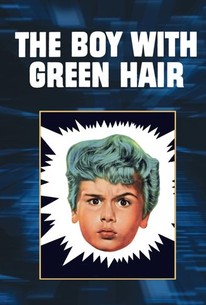 The Boy with Green Hair Photos

Joseph Losey's gentle parable concerning tolerance and understanding had the ill luck to be completed right before R.K.O. shifted hands to Howard Hughes. Hughes, an advocate of entertainment over message, tried to re-edit it and tone down its theme of tolerance. As it stands, the film deals with lonely child Peter Frye (Dean Stockwell), made an orphan by World War II, who finds himself shuttled from one relative to another -- until he finally ends up living in safety and security with elderly small-town waiter Gramps (Pat O'Brien). Then one morning, Peter wakes up to discover that his hair has turned green. Now the town looks at him in a totally different way -- children make fun of him, adults are disturbed at his appearance, and even the friendly milkman turns against him. Gramps try to calm down the local townsfolk when Peter runs away, but they refuse to listen. Instead they decide to band together to find Peter and shave his head.

Walter Catlett
as The King

Curtis Jackson
as Student
View All

Critic Reviews for The Boy with Green Hair

Few films so daringly span the local and the universal-or look so ravishing while doing so. Its eerie palette meshes perfectly with Losey's vision of a world out of joint.

Young Dean Stockwell shows amazing thought and skill in playing The Boy With the Green Hair -- shown off admirably in the film's Technicolor.

It's a nice picture. It hits at bigotry, it pleads for war's forgotten victims, and certainly, Dean Stockwell's a most appealing young actor.

A precursor to all those radiation fallout monster flicks of the Fifties. A telling cautionary tale worth a watch for far more than the nostalgic factor.

...a rather simplistic antiwar fantasy that pounds its message into the ground for the last twenty minutes or more.

A peculiar mixing of bigot-buster and pacifist sensibilities, rendered largely incoherent on account of Howard Hughes' attempts to transform the piece into a pro-war tract. Strange that such a safe-as-milk picture could have caused many of its talents to

It's certainly the most bizarre anti-war film ever made.

Audience Reviews for The Boy with Green Hair

I saw this film on a Netflix Stream and I must say right off the bat that it is the worst video Quality film I have ever watched, though I don't think that is of any fault of Netflix its just what's available. I was going to turn this one off after the first 10 minutes but then I was captured by the story line. A 1948 movie all about tolerance, about someone being different and when they are how bad people can treat them from kids to adults, how fast gossip can spread and what it can affect someone. Many Morals to the story in this one. Just wish video quality was a little better. 3 Stars

The Boy with Green Hair Quotes