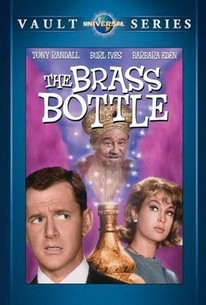 In this goofy comedy, an architect discovers that a recently purchased antique bottle is the home of a jovial but vexing genie who is more than willing to destroy anyone who would oppose or annoy his new master. This creates problems for the architect as he is more interested in impressing his in-laws-to-be than having his wishes granted. ~ Sandra Brennan, Rovi

Howard I. Smith
as Senator Grindle
View All

Critic Reviews for The Brass Bottle

The Brass Bottle is not a bad-little movie. For that is what it is -- a little movie, well-made but rather unpretentious.

Audience Reviews for The Brass Bottle

There are no featured audience reviews yet. Click the link below to see what others say about The Brass Bottle!