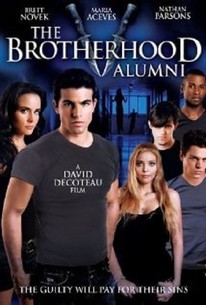 Years after an unsolved murder at Sunnydale High, the most popular students in class are summoned back to the school for a surprise reunion, only to find themselves at the mercy of a relentless killer who holds all the answers. Sunnydale was never the same after Leslie got killed on prom night. These days, the school is shut down and the hallways are eerily empty. But someone captured the crime on videotape, and when the former football star, his pretty girlfriend, the vicious flirt, the juvenile delinquent, and the practical joker are summoned back to the school, it's only a matter of time before the truth is revealed. Only one thing is for certain as the body count starts to rise -- finding this videotape is going to be murder.

Lindsey Landers
as Amy
View All

There are no critic reviews yet for The Brotherhood V: Alumni. Keep checking Rotten Tomatoes for updates!