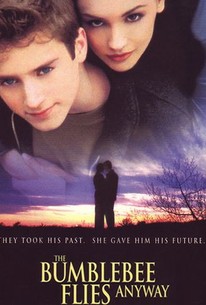 A teenager tries to find his memory in a hospital for the dying in this inspiring if downbeat drama. Barney Snow (Elijah Wood) is a young man suffering from amnesia; while he's able to summon up a few vague and disconnected memories of his past, most of it is extremely foggy at best, and he's somehow found his way into a hospital for terminally ill young people, where two of the doctors on staff (Janeane Garofalo and Roger Rees) try to work with him when they can spare time from their other patients. Barney gets to know some of the other patients at the clinic, including Billy the Kidney (George Gore III) and Mazzo (Joseph Perrino), who is battling cancer but not winning the fight. Barney also meets Mazzo's sister Cassie (Rachel Leigh Cook), who seems to be developing a crush on him. The Bumblebee Flies Anyway received enthusiastic notices for its younger cast when it was screened at France's Deauville Festival of American Cinema in 1999.

Sincerity often paves the way for the maudlin and overly touchy-feely, and that's what happens here.

In this drama the parameters of health and healing are expanded to include memory, friendship and love.

Picked this one out by mistake but it was an awesome accident for sure. Fantastic cast. A gem in the rough that takes you by storm.