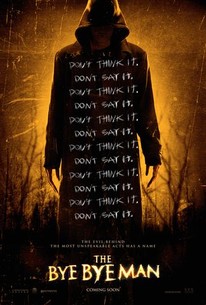 Critics Consensus: The Bye Bye Man clumsily mashes together elements from better horror films, adding up to a derivative effort as short on originality as it is on narrative coherency or satisfying scares.

Critics Consensus: The Bye Bye Man clumsily mashes together elements from better horror films, adding up to a derivative effort as short on originality as it is on narrative coherency or satisfying scares.

Critic Consensus: The Bye Bye Man clumsily mashes together elements from better horror films, adding up to a derivative effort as short on originality as it is on narrative coherency or satisfying scares.

People commit unthinkable acts every day. Time and again, we grapple to understand what drives a person to do such terrible things. But what if all of the questions we're asking are wrong? What if the cause of all evil is not a matter of what...but who? From the producer of Oculus and The Strangers comes The Bye Bye Man, a chilling horror-thriller that exposes the evil behind the most unspeakable acts committed by man. When three college friends stumble upon the horrific origins of the Bye Bye Man, they discover that there is only one way to avoid his curse: don't think it, don't say it. But once the Bye Bye Man gets inside your head, he takes control. Is there a way to survive his possession? Debuting on Friday, January 13th, this film redefines the horror that iconic date represents-stretching our comprehension of the terror this day holds beyond our wildest nightmares.

Marisa Echeverria
as Trina
View All

There's an art to being bad. The Bye Bye Man hasn't studied that art - but it's good enough to get you going.

The script teems with horror clichés (scribbled drawings, a creepy kid, the skeptical protagonist looking up the demon's origins on a library computer), and everything from the acting to the makeup to the special effects is atrocious.

Maybe all will be explained in the sequel. If so, your writer is happy to remain uneducated.

It may be that I'm assessing on a curve because it's January. But if you miss the slasher icons of old and have little patience for the reboot attempts they get periodically, it's nice to see at least a worthy attempt to add to that pantheon.

It just doesn't work, and the likelihood I'll think or say this unremarkable film's name again anytime soon is nominal at best.

To think that everyone here intended to make a movie this utterly lifeless and banal from the outset is infinitely more frightening than anything presented on screen.

It never quite develops itself nor does it explain a lot of avoidable mistakes. It's one of those films that is so painful to watch that you wonder, did they make it this bad on purpose?

"The Bye Bye Man" is one of those movies that takes on a completely different meaning when you know its backstory.

The opening scene is legitimately fantastic, but the rest of the movie falls far, far short of that.

The film is underwritten, overplayed, illogical, while grossly misjudging what it takes to scare people.

As a movie, The Bye Bye Man serves but one function: to deliver a safe, completely middle-of-the-road genre picture for undiscerning teens.

Not only can the movie not keep track of its own mythology, every cliché is trotted out, and it seems to be borrowing from anywhere and everywhere too.

One of the pluses of this haunted house outing is the realization that you would like to see a decent haunted house film made. On the minus side is when you admit to yourself that this isn't it. Nice to see Faye Dunaway and Carrie Anne Moss though.

What it lacks in originality it makes up for in a few good jumps. But the lack of story and scares leaves you not thinking and not saying anything good about this horror!