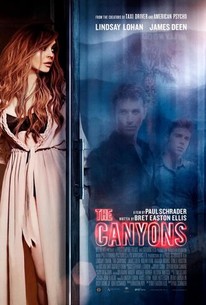 Critics Consensus: Oppressively misanthropic and ineptly made, The Canyons serves as a sour footnote in Paul Schrader's career -- but it does feature some decent late-period work from Lindsay Lohan.

Critics Consensus: Oppressively misanthropic and ineptly made, The Canyons serves as a sour footnote in Paul Schrader's career -- but it does feature some decent late-period work from Lindsay Lohan.

Critic Consensus: Oppressively misanthropic and ineptly made, The Canyons serves as a sour footnote in Paul Schrader's career -- but it does feature some decent late-period work from Lindsay Lohan.

While calculating young movie producer Christian (Deen) makes films to keep his trust fund intact, his actress girlfriend, Tara (Lohan), hides an affair with an actor from her past. But Christian becomes aware of her infidelity, which leads the young Angelenos into a violent, sexually-charged tour through the dark side of human nature. (c) IFC

News & Interviews for The Canyons

View All The Canyons News

Critic Reviews for The Canyons

Bret Easton Ellis's screenplay is filled with the worst kind of tin-eared dialogue and situations that seldom rise above their soapish base instincts, and in the third act, he clearly just gives up and turns one of his characters into Patrick Bateman.

With the pungent combination of a script from novelist Bret Easton Ellis, a performance by Lindsay Lohan and direction by Paul Schrader, The Canyons might have been a micro-budget sensation, but sadly it reeks of laziness.

Merely confirms Schrader as an all-but spent force (it's been largely downhill since the dismal Dominion) and nails Bret Easton Ellis as a one-trick pony.

Although the movie is flawed, [Lohan's] pretty terrific ...

The Canyons deserves a look.

Lindsay Lohan lights up the screen as a fallen starlet in Paul Schrader's much-maligned noir quickie.

Flat and imbecilic, The Canyons is a chore in every sense

While Deen may very well grow into a genuine actor, he's not there yet.

A movie decrying movies, funded and released online, shot and acted like reality TV - maybe its existence says more than its dialogue, but that doesn't make it any more engaging.

Despite a liberal dose of full frontal nudity, The Canyons fails to fully revel in its sleaze, struggling to even work as a deadpan satire.

It would be too easy to blame the leads for the film's flatness, but I'm not sure that better actors could have roused such listless dialogue.

On paper, the ingredients for an intriguing combo of life-art crossover, artistic schadenfreude and nihilist gloss. But lord, it's cheap and weak.

Audience Reviews for The Canyons

** I was reading Entertainment Weekly this past weekend when I came across a review for "The Canyons". They gave it a B+ and I had never heard of it. Sunday evening I was looking for something to watch, came across it and figured I'd give it a chance. It stars Lindsay Lohan as a yoga instructor who has a volatile/crazy sexual relationship with a producer played by James Deen. He becomes obsessed when he thinks she is cheating on him and things escalate from there. It's a thriller, that offers no thrills, well except to see Lohan naked through a lot of the movie. This is basically a notch above softcore porn's you see late night on Cinemax. Lot of nudity, some sex, and a whole lot of bad acting. It does have one of the weirdest sex scenes I've ever seen in a movie, as a foursome. Lohan probably is the best thing about the movie here. but even she does horrible. Deen has 2 facial expressions, bored and a smirkish pout. Plus, the way the movie ends is pretty stupid. They probably could have done some cooler stuff with the way Deen's character goes crazier and crazier, but they don't. It's an hour and a half that drags a lot, just feels too slow. I give it 2 stars for Lohan's two best assets, but other than that this is a complete skip. If EW gives this a B+ I'd really hate to see what their version of an A is.