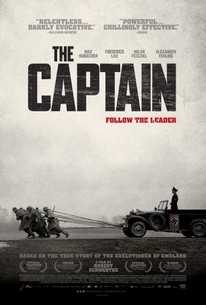 Critics Consensus: The Captain makes chillingly persuasive points about the dark side of human nature -- and underscores how little certain tendencies ever really change.

Critics Consensus: The Captain makes chillingly persuasive points about the dark side of human nature -- and underscores how little certain tendencies ever really change.

Critic Consensus: The Captain makes chillingly persuasive points about the dark side of human nature -- and underscores how little certain tendencies ever really change.

Based on the arresting true story of the Executioner of Emsland, The Captain follows a German army deserter, Willi Herold (Max Hubacher), after he finds an abandoned Nazi captain's uniform in the final weeks of World War II. Emboldened by the authority the uniform grants him, he amasses a band of stragglers who cede to his command despite the suspicions of some. Citing direct orders from the Fuhrer himself, he soon takes command of a camp holding German soldiers accused of desertion and begins to dispense harsh justice. Increasingly intoxicated by the unquestioned authority, this enigmatic imposter soon discovers that many people will blindly follow the leader, whomever that happens to be. Simultaneously a historical docudrama and sociological examination with undertones of the absurd, The Captain presents fascism as something of a game to be played by those most gullible and unscrupulous.

Wolfram Koch
as Schneider
View All

Director Robert Schwentke shoots in black and white, yet the story is strictly black, giving little insight into the cruel, impressively coolheaded Herold (Max Hubacher) except that he's incensed at the German retreat.

Captures the moment when fear and chaos bite and the ordered military existence crumbles into savagery and base urges.

It's a profoundly disturbing film, full of striking images.

What a chilling performance from Hubacher.

Schwentke's made one of the best films of his career here, but it still winds up a superficial exercise.

When it is all said and done, it is the kind of film that one can easily shrug off when it is over, something that one might think would be impossible given the source material.

[It's] an engrossing horror-drama about the mask - or, well, the uniform - of sanity and what happens when it's given the legal authority to slip.

Utterly enthralling from minute one, The Captain is a wild ride with an incredibly bonkers end-credit sequence and, though a difficult watch at times, is well worth a look.

A super supporting cast of black comedy experts launch this tragedy solidly into the realm of powerful social commentary.

The Captain is a hedonistic war drama which delves into the realms of comedy and absurdity in order to enhance the horror of Herold's deeds.

There are no featured audience reviews yet. Click the link below to see what others say about The Captain (Der Hauptmann)!