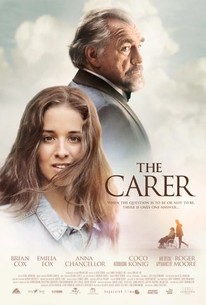 Diagnosed with a rare form of Parkinson's Disease, ailing theatrical legend Sir Michael Gifford (Brian Cox) is terminally ill. He's also foul-mouthed, irascible, and highly resistant to the concept of allowing a full time care giver into his home. Out of sheer necessity but hardly convicted at the notion herself, Sir Michael's daughter Sophia (Emilia Fox) reluctantly brings in a candidate to interview for the job. Into this fraught household comes Dorottya, who is greeted coldly by Sophia and Michael's estate manager and former lover Milly (Anna Chancellor) but nevertheless manages to convince them to allow her a chance. Dorottya, an aspiring Hungarian actress herself in need of a day job, secretly hopes that this opportunity to care for Sir Michael will propel her own career onstage and endures his unbearable temperment. Their relationship gradually improves as Dorottya's warming personality and knowledge of theatre begins to grow on the old lion. As Michael mellows however, Dorottya's underlying ambitions become more transparent and estate staff become suspicious of her true purpose in applying for the job. When Sir Michael is offered a Lifetime Achievement Award by the Great Britain Critcs' Guild, the increasingly contentious relationship between Dorottya, Sophia and Milly begins to climax as Dorottya encourages Michael to accept the award in person. Sophia however fears a final appearance by her father could prove catastrophic and forever taint his image should his illness be responsible for an accident onstage. The real drama begins to unfold when Sir Michael learns of his scheming daughter's plans to remove Dorottya from his life, from whom he has regained a sense of meaning and vigor.

Critic Reviews for The Carer

It's a tired formula. But saving graces come from two fine performances, the criminally underrated Brian Cox as high-maintenance Sir Michael and newcomer Coco Konig as Dorottya, who's plucky, compassionate and wise.

A simultaneously pretentious and amateurish luvviefest.

Cox's timing throughout is superb -- a comic masterclass that gives way to storms of temper worthy of Lear.

The film is depressingly obvious and mulched with a score which is the musical equivalent of pre-masticated invalid food.

János Edelényi's The Carer brings nothing to the party apart from the kind of clenched, eyelid-twitching grin of enforced affability that quickly loses any charm it ever had.

Cox is in rambunctious form and has an obvious rapport with König.

Cox is one hammy hunk of fun, first scene to last.

Brian Cox gets to tackle ample monologues from various Shakespearean works - catnip, I imagine, to any British thespian worth his or her salt.

Coco König and Brian Cox are the only stars in an otherwise mediocre show...

Though the film is predictable and rather unsubtle, it's worth watching for Cox's virtuoso performance.

he Hungarian director portrays, with the right amount of irony and tenderness, a relationship between two totally different people... [Full review in Spanish]

The movie's virtues make it possible to watch with some pleasure, but its failings limit that pleasure, which certainly cannot make up for the flaws.

Audience Reviews for The Carer

There are no featured audience reviews yet. Click the link below to see what others say about The Carer!