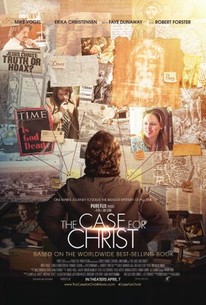 Critics Consensus: The Case for Christ shouldn't be dismissed, but like many faith-based productions, it's better at preaching to the choir than reaching the unconverted.

Critics Consensus: The Case for Christ shouldn't be dismissed, but like many faith-based productions, it's better at preaching to the choir than reaching the unconverted.

Critic Consensus: The Case for Christ shouldn't be dismissed, but like many faith-based productions, it's better at preaching to the choir than reaching the unconverted.

The Case for Christ Videos

The Case for Christ Photos

A hard-driving journalist, Lee Strobel was exactly where he expected to be at work: on top. His award-winning investigative reporting recently earned him a promotion to legal editor at the ChicagoTribune. But things weren't going nearly as well at home where his wife Leslie's newfound faith in Christ went against everything Lee believed-or didn't believe-as an avowed atheist. Utilizing his journalistic and legal training, Lee begins a quest to debunk the claims of Christianity in order to save his crumbling marriage. Chasing down the biggest story of his career, Lee comes face-to-face with unexpected results that could change everything he knows to be true. Based on Lee Strobel's award-winning bestselling book and starring Mike Vogel, Erika Christensen, Faye Dunaway, and Robert Forster, THE CASE FOR CHRIST opens in theaters April 7. It's an ideal Easter-season movie for anyone who has ever pondered the existence of God ... and what role He could play in their lives.

News & Interviews for The Case for Christ

View All The Case for Christ News

Critic Reviews for The Case for Christ

It's clearly intended as a teaching text, though its evidence-based defence of faith ... is a straw-man argument unlikely to have nonbelievers queuing up to be baptised.

On the whole, the film does exactly what is expected from it, but fails to ultimately convince and is eventually let down by a poorly executed screenplay and an almost ludicrous storyline.

For a Christian film, this is decently acted, but with the sentimentality cranked up, it drags on for what feels like eternity.

The Case For Christ is pretty slow going, tedious rather than offensive.

Based on Lee Strobel's best-selling book, this religious-themed drama earns points for proselytizing in more narratively compelling form than usual.

The Case for Christ, although the story of one man's journey to faith, can also inspire life-long believers...

It manages to present a more accurate and relatable Gospel than we've really ever seen before in the Christian film world.

For someone who loves journalism films like Spotlight, The Insider, etc., the investigative aspect certainly appeals to me. No, this film didn't quite rise to the level of those films, but still one that's well worth your time.

One of the better faith-based films I've seen.

At least atheists aren't completely demonized or portrayed as mustache twirling villains in this one.

Unfortunately, the depiction of Lee's marriage as well as his investigation into Christianity presents two plot lines that feel disparate and neither appear fully realised.

Audience Reviews for The Case for Christ

The Case for Christ is the fascinating true story about how an atheist's quest to disprove Christianity led him to the Lord. When his wife converts to Christianity after their daughter is saved from choking to death, investigative journalist Lee Strobel attempts to break her free by disproving Christ's resurrection, but he soon finds it to be harder to do than he expected. Erika Christensen and Mike Vogel are surprisingly good as Leslie and Lee Strobel, and the rest of the cast is pretty decent as well. And the writing does an impressive job at explaining the evidence in support of Christ's resurrection without getting too preachy or coming off as information dumps. Additionally, the film never loses sight of the character drama; staying focused on the Strobels and how they both struggle with the changes that Leslie's spiritual awakening has brought on. It's a little cheesy and melodramatic at times, but overall The Case for Christ is an inspirational film about the power of faith and prayer.

The Case for Christ Quotes