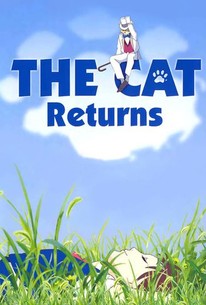 Aoi Hiiragi's manga about a schoolgirl's adventures with a very unusual feline comes to the screen in this witty anime feature. Haru is a girl who one day saves the life of a cat while on her way to school. To her surprise, Haru learns she came to the rescue of no ordinary cat -- the kitty introduces her to the Kingdom of the Cats, where the feline potentate attempts to arrange a marriage between her and his son. Brought into a world he never knew existed, Haru learns a few lessons about herself as he discovers more about the strange and magical secret world of the cats. Neko No Ongaeshi (aka The Cat Returns) was released in the United States with a dubbed soundtrack featuring the voice talents of Anne Hathaway, Andy Richter, Tim Curry, Peter Boyle, and Elliott Gould.

Yoshihiko Hakamada
as The Baron

Cary Elwes
as The Baron

Tim Curry
as The Cat King

News & Interviews for The Cat Returns

View All The Cat Returns News

Critic Reviews for The Cat Returns

Catchy entertainment for kids and adults...

[Director] Morita has a slightly cruder, more realistic sense of the world and its looniness than does Miyazaki, and you can see where The Cat Returns moves on a different track even as it pays homage to Japan's current animation master.

There's little tension or opportunity for emotional involvement in the brief story, and despite competent animation the cats are rarely anthropomorphised to good comic effect. One for anime -- and animal -- lovers only.

An enchanting, magical fable with a twisted vein of surrealism that makes you wonder exactly what they're smoking over there in the Land of the Rising Sun.

Miya-san may have said "sayounara" but the films made during his time will continue to inspire and delight.

This movie exhibits a craft that belies Morita's inexperience as a director.

While not the greatest Studio Ghibli film by any measure, I was thoroughly entertained by the creative and strange story of a young girl and her adventures in a world of cats.

When it comes to grand fantasy tales of little girls lost in wonderfully strange worlds, The Cat Returns is no Spirited Away. Still, it's a serviceable children's adventure film, with some memorable moments.

The Cat Returns...is all fluff, but it's cute and enjoyable fluff at the very least.

The story whisks gracefully along with little saunters and pitter-patters of humour. A Princess-and-the-Cat tale that also coolly reflects the arrogant aloofness, suave superciliousness and intriguing independence of man's best-when-convenient friend.

Audience Reviews for The Cat Returns

Sorta like 'Spirited Away' but with a much more whimsical and playful tone. Very bizarre but effectively endearing personal tale about a directionless schoolgirl who finds her path in life in the most unlikely of places. Filled with laugh-out-loud moments and a weird but memorable cast of characters (The Baron is voiced masterfully by Cary Elwes), it may not be the most original Studio Ghibli film but it is still thoroughly entertaining in it's brisk 72 minute runtime. Even without the two masters involved (Hayao Myazaki and Isao Takahata), the Ghibli crew can still make quality animated films. Side note: This is a spin-off of another Studio Ghibli flick named 'Whisper of the Heart', which was a grounded slice-of-life masterpiece in which it's brief dream sequences featured The Baron. Both 'Whisper of the Heart' and 'The Cat Returns' have no real story connections, so watching 'Whisper of the Heart' is not needed in order to understand the plot (although you should definitely still give it a viewing since it's a criminally underrated near-classic). Plus, watching 'Whisper of the Heart' gives 'The Cat Returns' story a fun context to view it in.

Directed by Hiroyuki Morita and voices by Chizuru Ikewaki, Yoshihiko Hakamada, Aki Maeda, Takayuki Yamada, and Kenta Satoi. Whispers from the heart is my favourite Studio Ghibli film outside Miyazaki and it's the perfect combination of both Fantasy/Drama even though there is little of the first. And this spin off the Cat Returns isn't on any grand-scale as any other film they do, but it's very enjoyable. It's like a film made for kids or my sister's age around 8, I am 18 but I still really enjoyed this, still it's not as good as the ones by Ghibli. A young girl named Haru seems to be behind everything in life, Of course always being late to school and then one day she rescues a mysterious cat from traffic and soon finds herself the unwelcome recipient of gifts and favours from the King of the Cats, who also wants her to marry his son, Lune. With the assistance of a tall white, grouchy cat and an elegant cat statuette come to life the girl visits the Cat Kingdom and narrowly escapes again. [IMG]http://i54.tinypic.com/35lcgba.jpg[/IMG] I saw this when it was out back in 2003 I think? And I still remember Whispers from the Heart being better but this was still an okay spin-off. 70% for story: Truly not as strong as any others from them, but I enjoyed the story it can be lacking in originality and can be slow, but overall good. 80% for Voice acting: I haven't seen the English version yet, but our version I think just lacked, I don't think I could agree on the voice cast, but overall very professionally done. 70% for Characters: Although there wonderfully drawn, I didn't think there was enough on them or not enough characters development. The first movie had a lot and too the cats of course. 90% for animation: Again I love traditional animation, there is truly nothing better or around. And it's better than working with CGI. Though Despite how perfect it look I felt like it was missing something for the next 10%. Still not on any scale as any other ones by them. 80% for everything else: Some wonderful scenery and music but that's all about it. This is a good one not as strong but still great. Keiko's score 80-100