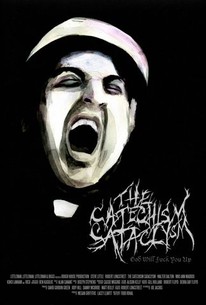 Storytelling in all its forms is skewered in The Catechism Cataclysm. In this divinely bizarre and funny tale, wild characters infuse stories within stories until the lines between the Bible, Mark Twain, and campfire tales are hilariously blurred. Father Billy (Steve Little), an eccentric young priest, is forced to take asabbatical by his superiors when he is discovered telling inappropriate parables to his flock. Billy tracks down his high-school idol Robbie (Robert Longstreet), who begrudgingly agrees to a canoe trip. On the water, the two men reminisce about Billy's days as the keyboardist in a Christian band and Robbie's as a guitarist for a metal band. When night approaches, they realize they have lost their way--and that's when things get weird. -- (C) IFC Midnight

News & Interviews for The Catechism Cataclysm

View All The Catechism Cataclysm News

Critic Reviews for The Catechism Cataclysm

A grating and witless would-be spoof of religion, male-bonding and, it seems, horror movies.

William and Robbie's adventure has a shaggy-dog charm that's hard to resist.

Even after the movie takes its turn for the surreal, it remains rooted in the reactions of slack-faced good guy Little and the gruff-but-loveable Longstreet.

Such detours into psychotronic oddity for its own sake can make even a 75-minute running time feel like an eternity.

Taking the notion of toilet humor literally but incapable of delivering its promised religious satire, The Catechism Cataclysm is more muddled than its tongue-twister title.

The film is kind of a road trip, kind of a voyage of self-discovery, and kind of an "Apocalypse Now" style journey into a chaotic, surreal hell.

...it's ultimately impossible to walk away from The Catechism Cataclysm feeling that it could (and should) have been much, much better.

It's a very dumb comedy made by very smart folks.

A lot of it is tedious and directionless.

As a professional preacher, I could appreciate (the film) to some degree as a satiric take on storytelling in both religious and secular circles. Sorry to say, that's about as far as my appreciation goes.

A priest and a washed-up heavy metal drummer step into a boat. . . . This isn't the start of a joke, but rather the plot of Todd Rohal's strange IFC film.

Audience Reviews for The Catechism Cataclysm

The Catechism Cataclysm starts out promising to be one of the great comic masterpieces of our time. Perfect comic acting and comic timing, not to mention some pretty darn good comic writing, had me super excited. Unfortunately, before the movie is over, it spirals into total lazy randomness, squandering its potential. Steve Little stays game throughout the whole film, though, and for that I am grateful.