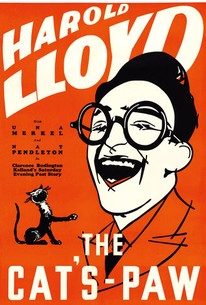 Harold Lloyd plays Ezekial Cobb, a missionary's son who has spent his entire life in China. Cobb is sent to his father's home church in California, where it is hoped he will find a wife. A true babe in the woods, Cobb is befriended by politician Jake Mayo (George Barbier). Mayo is a cog in a crooked political machine whose bosses plan to set up a "reform" candidate for mayor, so that they can continue their underhanded activities unmolested. The candidate drops dead, so Mayo sets up the innocent Cobb as the mayor-to-be--a "cat's paw" to deflect attention from the system's corruption. But once elected, Cobb takes his duties quite seriously and begins to clean up the town. The machine frames Cobb with planted evidence of wrongdoing, destroying the lad's political career. Undaunted, Cobb remembers the story of an ancient Chinese leader, who, similarly disgraced, took the law in his own hands and executed all known criminals in his last days of power. Cobb orders that every crook in town be rounded up and brought to a dark cellar. He insists that they confess their crimes or face instant death--and backs up his words by "beheading" two of the crooks on the spot! Actually, these executions are cleverly designed magical illusions, and no one is really killed; but the terrified criminals are so hoodwinked by Cobb's apparent cold-bloodedness that they literally climb over one another to confess. Cobb is exonerated, and honesty is restored to his administration. While not Harold Lloyd's best feature film, The Cat's Paw is definitely his most unorthodox.

James Donlan
as Red the Reporter

David Holt
as Ezekiel as a Boy

Vince Barnett
as Wilks, a Gangster

Alec B. Francis
as Rev. Thatcher

John Ince
as Burke, a Politician

Ernie Alexander
as Man on Street

Tom Dugan
as Man on Street

John Wray
as Man on Street

Charles McMurphy
as Cop at elevator

Critic Reviews for The Cat's Paw

Harold Lloyd performs with a sedateness which may baffle some of his old admirers. But the story is lively. A family picture.

The story is nearly always exciting, and it leads to an exceptionally ingenious climax.

Though one of Lloyd's weaker comedies, it's still striking as a curio.

Audience Reviews for The Cat's Paw

There are no featured audience reviews yet. Click the link below to see what others say about The Cat's Paw!