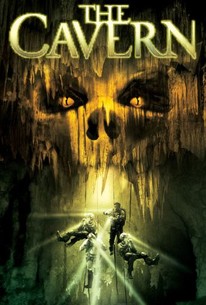 Eight spelunkers exploring an uncharted cave system in Central Asia are thrust into a terrifying fight for their lives when their guides are killed and an unknown presence stalks them from the shadows in director Olatunde Osunsanmi's subterranean shocker. The group leaders have fallen prey to an unseen predator with a deadly bloodlust and a seemingly supernatural gift for navigating the labyrinthine cave system. Upon discovering that the only known exit has been mysteriously sealed since their entry, the remaining survivors must travel ever deeper into the pitch-black maze in hopes of discovering an alternate means of escape. As the body count continues to rise and the memories of daylight fade to a forgotten dream, the determined explorers charge head on into the into a world where humankind has lost its position at the top of the food chain.

Kamen Gabriel
as Vlad
View All

Critic Reviews for The Cavern

Audience Reviews for The Cavern

If the filmmakers couldnt even properly simulate the lighting from a campfire how did they think they could pull off a movie based out of a cave? The lighting for a dark setting like that is tricky and if they cant even light subjects by a campfire they have absolutely no business taking on a challenge like this. The lighting which was supposed to represent a campfire was so inconsistent and the color temperature kept changing from yellow to dark orange. It was obvious the fire was being simulated. Absolutely awful. In one scene you could even see the film crew and equipment in the reflection of the guy's glasses. Unprofessional. Shouldve had the guy take his glasses off. Also was I the only one that noticed the tents GLOWING? Has the film crew never been camping before? Tents arent bright neon green and yellow and even if they were, one lantern couldnt make an entire tent glow. The writing was cheesy/predictable and the acting was way off. The lighting only got worse as they went into the cave. The flashlights on their helmets put a glare on pretty much every shot. They were a distraction and didnt do what they were meant to do which was to LIGHT the scene. Common sense. I only watched the first 20 minutes but I assume the movie just gets shittier from there. I typed this review from my ipad so I apologize for any spelling errors.