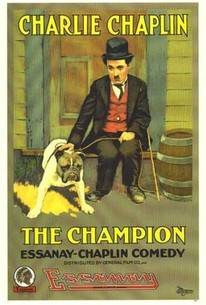 The Champion, Chaplin's third film for Essanay, is easily one of the funniest and is his most advanced film to date in plotting and characterization. We meet Charlie and his bulldog sharing a found hot dog, which the dog won't eat until it is salted. They pass a gymnasium advertising for sparring partners. Charlie finds a lucky horseshoe and after witnessing the condition of the previous sparring partners, he decides to employ it in his left boxing glove. He thereby kayos the club champ and becomes the new golden boy. He begins to train for the big championship fight against Champ, Bud Jamison. The beautiful daughter of the Gym owner, Edna Purviance gets his interest and seems taken with him. A shady character Leo White, a slimy betting tout, oozes into camp and tries to bribe Charlie into throwing the big fight, but while Charlie takes his money, he treats him with total contempt. On the day of the fight, Charlie says an emotional goodbye to his dog and enters the ring. In the audience are cowboy-star Bronco Billy Anderson, one of the founders of Essanay (whose initials, along with partner George K. Spoor's are the source of its name), and Ben Turpin as the vendor. The hilarious slapstick prizefight is pretty even at first, but by the fourth round Charlie's getting the worst of it. Seeing the trouble his master is in, the bulldog jumps into the ring and restrains the opponent by the seat of his pants while Charlie delivers a series of coup-de-grace punches. Charlie is hoisted on the shoulders of his cornermen as the new Champion.

Ben Turpin
as Salesman
View All

Critic Reviews for The Champion

There are no critic reviews yet for The Champion. Keep checking Rotten Tomatoes for updates!

Audience Reviews for The Champion

Chaplin short that may also serve as the prototype for the great choreographic boxing match in "City Lights". Lots of punches thrown here, with Leo White's scheming gambler taking the worst of it(aside from the eponymous character of Bud Jamison, of course).