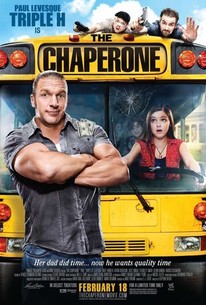 Pro wrestler Paul "Triple H" Levesque stars in this action crime comedy as Ray, a former bank robber who's attempting to start a new life when his criminal past returns with a vengeance. Life on the outside can be tough for an ex-con, so when opportunities prove to be few and far between, Ray's old crew tries to entice him to come back into the fold for one last heist. Ray considers rejoining, but ultimately decides against it -- signing up to chaperone his daughter's class' trip to the natural history museum instead. Unfortunately, when Ray's crew doesn't quite get the message, the bank robbers and the field-tripping students cross paths at the most inopportune times.

Critic Reviews for The Chaperone

A lightweight comedy aimed, presumably, at tweeners and fans of World Wrestling Entertainment

"The Chaperone" is dreadful enough to make you wish Dwayne "The Rock" Johnson was still making family movies.

Presumably there's an audience out there for old-fashioned, poorly written, unevenly thesped, family-friendly tales of redemption starring beefy wrestlers and a bunch of kids, but it's difficult to imagine who.

Like last year's "Legendary" and "Knucklehead," which didn't exactly slam moviegoers to the mat with their entertainment chops, this haphazardly clichéd comedy-drama about redemption similarly suffers.

The Chaperone is being marketed as a comedy, though no one seems to have told anyone involved.

Wrestler's family comedy is forgettable but OK for tweens.

It's good, clean entertainment and if you have children and are looking for a night out with them, where they won't be rolling their eyes, they'll have a good time and you might even enjoy yourself, somewhat, as well.

The surprise is that WWE's Triple H, Paul Levesque, is a nimble, appealing and large presence in the leading role...

If WWE is going to continue to insist on placing its stars in ill-fitting projects like this, the least it could do is spring for some livelier material.

A mall-direct mash-up that will bring the entire family together-for about an hour and a half.

It's a blatant exploitation film (what Variety calls "an actioner"), yet its obviousness, keyed to Levesque's squared-circle appeal, is humorous.

Audience Reviews for The Chaperone

The film wasn't bad, but it wasn't great either. Triple H is trying to do what action stars have done before, a family film. Like when Arnold did Kindergarten Cop, Diesel did The Pacifier, and The Rock did The Game Plan. Those films were better than this one. They had a good idea for a film here but they didn't execute it correctly. I was expecting better from director Stephen Herek. The tone of the film is off. Some the jokes fall flat. A lot of the supporting cast is miscast. Triple H does the best that he can with what he has to work with. I still like him in Blade Trinity. Ariel Winter was good as his daughter and they have a great on screen chemistry. Yeardley Smith (Lisa Simpson) steals this film.

Ray Bradstone (Paul "Triple H" Levesque) has alot on his plate...fresh out of prison after doing time for some fellow thieving criminals that got away. Now that he is out, one of the cronies want for him to do another score...while he has plans on attempting to clear up his sordid past in his daughter Sally Bradstone's (Ariel Winter) mind, she is consistent in NOT having anything to do with him for leaving the family so many years ago...because he had to got to jail. With all that is going on something happens which forced him to go back in to that dark and hideous life of crime, until he sees an opportunity that happens to turn the tables on him going back down that dark tunnel. Being The Chaperone for his daughter's school trip...which will have you sitting throughout this comedy wondering how or if they will ever mend the broken bridge father and daughter. Truly enjoyable.

A home-run of great genuine laughs and heart. An outragiously funny and heart-warming comedy. Its in the spirit of The Pacifier and Kindergarden Cop. A hilarious joy-ride from start to finish and it only gets better as it goes on. Paul Triple H Levesque is a great surprise in both the comic and dramatic aspects of the character and the film. Ariel Winter is marvelous. Winter and Levesque make the film and the chemsitry work wonderfully. This movie was just fun to watch and has lot going for it. It`s good and clean entertainment.

Cast: Triple H, Kevin Corrigan, José Zúñiga, Kevin Rankin, Enrico Colantoni, Israel Broussard, Jake Austin Walker, Ashley Taylor, Cullen Chaffin, Darren O'Hare, Ariel Winter Director: Stephen Herek Summary: After serving time in the slammer for driving the getaway car in an attempted bank robbery, Ray Bradstone (professional wrestling star Paul Levesque -- better known as Triple H) is a reformed family man who wants to chaperone his daughter's class trip. But some bad guys (Kevin Corrigan and Kevin Rankin) from his past have other plans. Can Ray outwit these nitwits while keeping himself and his daughter (Ariel Winter) safe from harm? My Thoughts: "There are only two reasons one would watch this film. 1. If you have kids (or like myself nieces and nephews) or 2. If your a fan of wrestling. I happened to watch it for reasons of number one. Wrestlers and acting.. Some can pull it off (The Rock) and some should just stick to wrestling. Not naming any names considering I haven't watched many wrestlers in films. Well, not knowingly. Paul 'Triple H' Levesque, wasn't bad in the film. I've seen him act before in a Blade film I believe. But the acting wasn't nothing special either. The kids loved it and I guess that is what will matter if those are your reasonings for seeing this film."