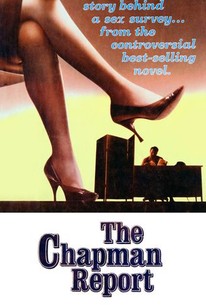 Critic Reviews for The Chapman Report

Cukor's trashy melodrama about the sex lives of L.A. housewives suffered due to censorship, but it's worth seeing for Claire Bloom's performance as a nymphomaniac; Shelley Winters and Jane Fonda co-star

Audience Reviews for The Chapman Report

Wonderful collection of actresses who all give interesting performances. Glynis is the most fun though.