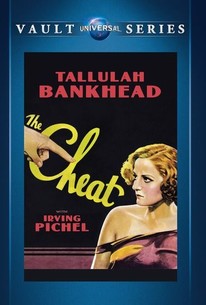 This Depression-era melodrama chronicles the travails of a wealthy family that is nearly destroyed by a wife's compulsive gambling. The trouble begins when the Long Island housewife loses 10-grand while gambling in a club. Trying hard to conceal this enormous loss from her hubby, she embezzles from a charity fund and tries to win back the fortune by playing the market. Unfortunately, it fails and she is forced to take money from a wealthy fellow who has just come back from Asia. When her husband finds out, he pays the money to the cad, but he wants the wife instead. When he insists, the wife shoots him dead. A trial ensues, and there, the devoted husband sacrifices himself by taking the rap until his wife bursts in and admits her wrongdoing. ~ Sandra Brennan, Rovi

Critic Reviews for The Cheat

The Cheat is a curiosity, and recommended if only to see Tallulah Bankhead, one of the great grand divas of the 20th century

Audience Reviews for The Cheat

Overheated pre-code elevated by Tallulah who looks amazing and wears some eye popping creations. The story is so much nonsense with a bit of a sadistic twist but as a chance to see the you Bankhead it can't be beat.