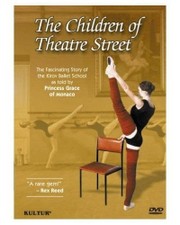 The Children of Theatre Street

The Children of Theatre Street Reviews

Megan P
½ March 2, 2012
"Talent is considered worth measuring only when it occurs in the right body," the narrator announces to the camera. Hundreds of children are paraded across the camera, all aged 10-12, gleaned from an application pool of thousands, all hopeful that today their lives will change forever. The year is 1977 and they're all Russian children hoping to be chosen by the illustrious Vaganova Choreographic Institute and Kirov Ballet.

The audition process as we see it is especially rigorous, with children measured and chosen for the very specific physical proportions deemed necessary for the ballet before they even get a chance to show their talent but, as this movie carefully illustrates, the audition is only the first rigorous step in the lifetime of a Kirov dancer.

The narrator is Princess Grace of Monaco, perhaps better known as Grace Kelly, and her calm voice will be with us throughout the entirety of The Children of Theatre Street. Directed by Robert Dornhelm and Earle Mack, this academy award-nominated film was produced by a team made up of both Soviet and western filmmakers in the midst of communist power in Russia.

But the focus here is not on the politics, it is is on the children mentioned in the title. This documentary follows various students of the school through one demanding year in their life. We see several students prepare for the performance that marks their graduation from the school, observe their activities and interactions, and find out just how much hard work these students must undertake in order to perfect their craft.

We are also introduced to both the teachers and staff at the school, although only casually. We hear a bit about the history of the Kirov Ballet and are treated to magnificent shots of St. Petersburg. Because of when it was produced in the film can occasionally seem a little staged, but the interactions between the young ballerinas and the detail into their lives more than make up for this.

This movie is about hard work at it's very core. It is about the sweat and the tears that these students put into every day of their training and their lives, but it's also about the joy that lies in the dance.

For the children of Theatre Street, dance was their life- a life they were determined to live to the fullest.

James H
½ July 22, 2007
Excellent documentary, especially for anyone with a liking of ballet. The narration is well written and excellent delivery by Grace Kelly. Memorable and fascinating.
Page 1 of 1