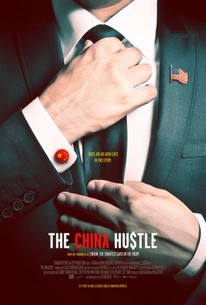 Critics Consensus: The China Hustle may not have enough anger to wholly satisfy, but Jed Rothstein's slick documentary is an informative primer on financial fraud on a geopolitical scale.

Critics Consensus: The China Hustle may not have enough anger to wholly satisfy, but Jed Rothstein's slick documentary is an informative primer on financial fraud on a geopolitical scale.

Critic Consensus: The China Hustle may not have enough anger to wholly satisfy, but Jed Rothstein's slick documentary is an informative primer on financial fraud on a geopolitical scale.

From the producers of ENRON: THE SMARTEST GUYS IN THE ROOM comes a Wall Street heist story about a still-unfolding financial crime so big, it has the power to affect all of our wallets. Investors on the fringes of the financial world feverishly seek new alternatives for high-return investments in the global markets, and have found a goldmine in China. But when one investor discovers a massive web of fraud, everything else is called into question. Jed Rothstein's documentary rings the alarm on the need for transparency in an increasingly deregulated financial world by following those working to uncover the biggest heist you've never heard of.

News & Interviews for The China Hustle

Ready Player One Is Certified Fresh

View All The China Hustle News

Critic Reviews for The China Hustle

Think the trade deficit is a source of economic concern? The China Hustle makes the imminent trade war look like a fight over small change.

The frank, level-headed tone of the documentary does not transform into the righteous anger that such financial corruption calls for.

In horror movies, monsters often lose their power to terrify once they come fully into the frame. But as Rothstein reveals the full shape and size of an ogre that has slipped into our financial markets, just try to calm your growing dread.

Makes a sound case for greater regulation of financial systems.

At a time when financial regulations have been gutted, stock market indexes reel, and trade wars threaten, Jed Rothstein's slick and revealing documentary "The China Hustle" should only add to the anxiety and gloom.

The story gets a little repetitive after a while, but Rothstein does an even better job of explaining investment jargon than Adam McKay did in The Big Short, and he doesn't require gimmicks like putting Margot Robbie into a bathtub to do so.

Another by-the-numbers doc about an ongoing financial crisis rooted in manipulation and apathy.

It isn't so much a lesson in economics as it is a film about due diligence and common sense.

This makes for a fine companion piece to whatever our leader is up to with his raising of tariffs and jawboning about China's longstanding practice of stealing intellectual property from US companies attempting to gain access to China's domestic market.

Apparently, investing in China is a terrible idea. Dense but important doc.

It's a lot to keep track of, but Rothstein is a clever editor and the film flows so that the constant information dump never becomes overwhelming.

This documentary unveils some shocking facts about investments, and how few protections there are for investors facing this kind of scam.

Audience Reviews for The China Hustle

There are no featured audience reviews yet. Click the link below to see what others say about The China Hustle!