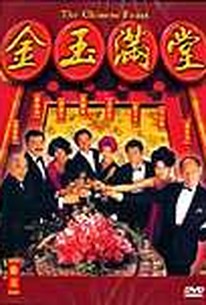 With a marvelously convoluted plot and featuring plenty of slapstick action, Chinese Feast is essentially a kung-fu film with a tasty twist: the combatants battle with knives, not to carve each other up but to make exquisite culinary delicacies. The story's impetus comes from a long-standing feud between cooking schools and centers on an upcoming cook-off in which two master chefs compete to present the most delicious version of the Qing & Han Imperial Feast staples -- monkey brains, bear paw, and elephant trunk. ~ Sandra Brennan, Rovi

There are no critic reviews yet for The Chinese Feast (Jin yu man tang). Keep checking Rotten Tomatoes for updates!

There are no featured audience reviews yet. Click the link below to see what others say about The Chinese Feast (Jin yu man tang)!