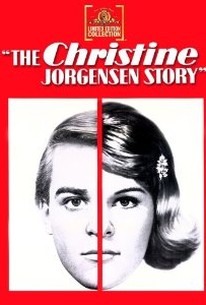 Taken from the autobiography of the world's first transsexual, George Jorgensen (John Hansen) is a woman trapped in a man's body who opts for surgery and hormone treatments to make him a woman. Events of his childhood are covered, showing young George preferring dolls over contact sports. Inducted into the Army, the sexually confused George learns to hide his emotions during his military experience. He travels to Denmark where a pioneering team of doctors agree to perform the surgical process for the first time ever. His kindly aunt in Denmark (Joan Tompkins) gives George the name of Christine after her late daughter. Hansen is unconvincing as a woman, and there are several passages in this biographical drama that lead to unintentional hilarity. ~ Dan Pavlides, Rovi

Will Kuluva
as Prof. Eastbrook

Pamelyn Ferdin
as Dolly, as a Child

Eddie Frank
as George, as a Child

Peter Bourne
as Whalstrom
View All

There are no critic reviews yet for The Christine Jorgensen Story. Keep checking Rotten Tomatoes for updates!

There are no featured reviews for The Christine Jorgensen Story at this time.