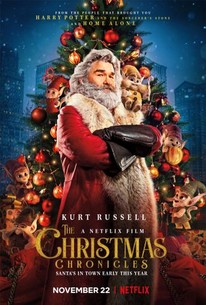 Critics Consensus: Viewers seeking a fresh holiday viewing option -- or those simply in the mood for Santa Kurt Russell -- should find The Christmas Chronicles well worth a yuletide stream.

Critics Consensus: Viewers seeking a fresh holiday viewing option -- or those simply in the mood for Santa Kurt Russell -- should find The Christmas Chronicles well worth a yuletide stream.

Critic Consensus: Viewers seeking a fresh holiday viewing option -- or those simply in the mood for Santa Kurt Russell -- should find The Christmas Chronicles well worth a yuletide stream.

THE CHRISTMAS CHRONICLES, a holiday adventure from producer Chris Columbus ("Home Alone", "Harry Potter and the Sorcerer's Stone") and director Clay Kaytis ("The Angry Birds Movie"), tells the story of sister and brother, Kate (Darby Camp) and Teddy Pierce (Judah Lewis), whose Christmas Eve plan to catch Santa Claus (Kurt Russell) on camera turns into an unexpected journey that most kids could only dream about. After staking out Santa's arrival, they sneak into his sleigh, cause it to crash and nearly derail Christmas. As their wild night unfolds, Kate and Teddy work together with Santa - as you've never seen him before - and his loyal Elves to save Christmas before it's too late.

Lauren Collins
as Woman at Another Table

News & Interviews for The Christmas Chronicles

View All The Christmas Chronicles News

Critic Reviews for The Christmas Chronicles

In the end, the film succumbs to the tropes and emotional contrivances of the family melodrama at its core, ending up as a serviceable yet mostly forgettable addition to the already overstuffed genre of holiday-themed films.

The film doesn't know how to get out of its own way and foreground what's working, namely the dynamo of screen presence placed more prominently in the advertising than the feature itself.

The film's no great shakes, but Russell's star power in "The Christmas Chronicles" is a gift anyone should be happy to claim.

Hot Santa is a premise that requires a few risks, but this movie falls just short of making the leap. Still the film has a few interesting points to make as to the way the idea of how Christmas has changed over the years.

Russell makes for a very fine Santa Claus, but he can't elevate a fairly dull script and a plot so familiar that even the youngest viewers will see all the twists coming.

It's not your granddad's Christmas movie... [but] by the end of it I was sold.

The ultimate Christmas movie of 2018. [Full review in Spanish]

An over-sweetened, but surprisingly fun, witty and imaginative Christmas offering with an exuberant performance from Russell.

The true strength of The Christmas Chronicles is not in its conventional plotting, but the relentless sense of silliness and fun it brings to the format.

If you like ridiculousness, holiday spirit, festive puns of the highest order -- then get your Netflix ready. Grinches need not apply.

Audience Reviews for The Christmas Chronicles

From Netflix comes the magical holiday adventure The Christmas Chronicles. When Teddy and Kate Pierce try to capture Santa on video they accidentally cause his sleigh to crash, putting Christmas in jeopardy. Kurt Russell leads the cast and gives an excellent performance as Santa Claus. And, newcomer Darby Camp is pretty good too and has tremendous screen presence. However, the writing is a bit uneven; switching from a family comedy to a kid's animated film whenever the elves show up. Also, the animation and creature designs for the elves are really poor; sticking out in the scenes like a sore thumb. Still, there are a lot of fun comedy bits and the Santa Claus mythology is rather interesting. The Christmas Chronicles has its problems, but overall it's an entertaining Christmas film that the whole family can enjoy.

Having seen a couple of films over the last decades makes you roll your eyes at the "Just be yourself!" speeches and the portrayed sanctity of Christmas and family values. But Kurt Russell is a great Santa and there are charming parts too. I probably would have loved this movie as a kid. It's also a throwback to the kind-hearted and naive event movies from the 80s, they don't make them like this anymore. It's almost Adventures in Babysitting part 2, just with Santa as sitter.

In the spirit on Christmas movies of decades past like The Santa Clause or Santa Claus: The Movie, The Christmas Chronicles is not objectively speaking a good movie. Itâ(TM)s cheesy, forcibly heartfelt, and full of tropes. It is, however, exactly what I needed from a Christmas movie. The only real criticism I have of the movie is the CGI, itâ(TM)s pretty bad. The elves look like they belong in some CG tv special, and the flying sequences on the sleigh are never convincing. Having said that, the elves are still fun, and having big action sequences in a Santa movie is a lot of fun, I just wish they were done better. Everything else the movie does it does well. Itâ(TM)s never very funny, at least not for me, but itâ(TM)s charming as hell and Kurt Russell is extremely charismatic as Santa. Itâ(TM)s one of those movies where you can tell the cast was having a blast making it, and this is especially true with Russell, who is clearly enjoying himself so much itâ(TM)s infectious and Santa is absolutely a character that this works for. This is probably my favorite film take on the Santa character. Heâ(TM)s kind, but stern when he needs to be, and has this loving understanding quality of him. He plays like a lovable Uncle who remembers everything you love, but just for the whole world. Heâ(TM)s also a musician and a badass when he needs to be. Surprisingly the kids are great too. I really thought I would find them grating after a while, but damnit all they work and seeing Santa through their eyes works. Itâ(TM)s dopey, itâ(TM)s campy, itâ(TM)s everything you need from a Christmas movie.

Films that rely on the premise of the movie revolving around Christmas are always a perfect viewing experience during the holidays. Itâ(TM)s very rare that viewers feel the absolute need to watch a holiday film during fall, spring or summer, so when these movies finally arrive/air, itâ(TM)s worth the wait. I feel a certain leniency when talking about Christmas movies, due to the fact that I just enjoy watching them in general. That being said, I will be putting my personal bias aside in favour of giving an authentic review here, which is going to be quite positive regardless. One of Netflixâ(TM)s latest feature film releases in The Christmas Chronicles may just be one of the best Christmas movies in recent memory, but thatâ(TM)s because there really havenâ(TM)t been many great ones in the last decade or so. Hereâ(TM)s why I believe The Christmas Chronicles deserve your attention this holiday season. Still grieving the loss of their father and having to stay home alone on Christmas Eve, two siblings discover the real Santa as he enters their house, which sets them on a journey with him to save Christmas. Yes, this plot is very formulaic and has been done a million times in throughout the years, but these are all very like-able characters. Teddy (the older brother) begins as a troubled teen, but has a great arc throughout the movie, especially between him and his sisterâ(TM)s relationship and Kate (his younger sister) is reinvigorated with her belief in Santa. This film explores many facets of the Christmas season and what it means, while also presenting a fun adventure for the whole family. On top of that, Kurt Russell makes for a fantastic Santa Claus. Aside from appearing in tentpole films like The Fate of the Furious or Guardians of the Galaxy Vol. 2, itâ(TM)s been a while since heâ(TM)s truly headlined a mainstream film. While Netflix isnâ(TM)t exactly mainstream in terms of theatricality, I would classify this as his biggest lead role in quite a while. Not only is it nice to see him at the forefront, but he truly does play a great Santa. His enthusiasm is terrific and the way he plays off the kids as if heâ(TM)s almost tired of being Santa or just too good at it in general, his performance makes this film worth watching alone. The subtle adult humour makes this movie an easy watch for adults, but thereâ(TM)s also a lot to go around for kids. From computer-generated elves to Santaâ(TM)s sleigh flying through the sky with computer-generated reindeer, this has everything that kids hope to see in a film like this. Not that Iâ(TM)m saying itâ(TM)s as good of a film as the original Tim Allen-lead The Santa Clause, but this is the first movie since then that had such a broad spectrum of comedy. From lame poop and fart jokes for kids to humour that only adults will understand, The Christmas Chronicles truly has it all. As I said though, youâ(TM)ve seen this movie a million times, but if that doesnâ(TM)t bother you, I think youâ(TM)ll thoroughly enjoy this film as I did. In the end, The Christmas Chronicles was a very nice surprise from Netflix and I hope more holiday films like this can be made in the foreseeable future. Aside from R-rated sequels to comedies like Bad Santa 2, A Bad Moms Christmas, or even A Very Harold and Kumar Christmas, original Christmas movies have been lacking over the last few years. Although not perfect, this was a breath of fresh air and I can absolutely see myself revisiting this one in the Decembers to come.