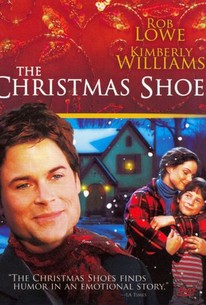 This sentimental made-for-TV drama was based on the bestselling novel by Donna VanLiere, which in turn was inspired by the popular song of the same name. Rob Lowe stars as Robert Layton, a workaholic attorney who sorely neglects his family, even during the Christmas season. Clearly, Layton is overdue for a "humanizing" treatment, which comes in the form of a little boy named Nathan Andrews (Max Morrow). Learning that his mother, Maggie (Kimberly Williams), is dying from congenital heart failure, and unable to financially rely upon his underemployed father, Jack (Hugh Thompson), Nathan goes about collecting tin cans and other throwaways so that he can afford an expensive pair of red shoes for his ailing mom. Nathan's plight not only touches Layton, but also has a heartwarming trickle-down effect on the lawyer's estranged family. The Christmas Shoes debuted December 1, 2002, on CBS.

News & Interviews for The Christmas Shoes

View All The Christmas Shoes News

Critic Reviews for The Christmas Shoes

For this sort of role, [Rob Lowe] leaves The West Wing?

Audience Reviews for The Christmas Shoes

Rob Lowe is an overworked attorney in need of some Christmas spirit. Meanwhile, a young boy must come to terms with his terminally ill mother's condition. It's a highly manipulative piece of filmmaking. There's plenty of sad, crying speeches. It sucks out most of the emotion when it's trying so hard to upset it's audience. Luckily, their performances and Christmas cheer are enough to keep this film afloat.

I thought everyone gave good performances, but Rob Lowe didn't really dazzle me. He was just kind of there... You can definately tell this is a made for TV movie, and even if it is a little cheesy, it will make you cry (or at least make your throat tight while you try to pretend you're not crying!)

What a tear jerker movie - and a Christmas movie to boot. It is OK I guess.