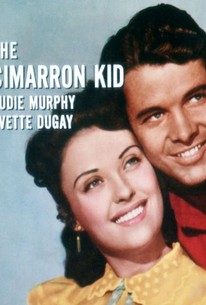 In this western, a man imprisoned for harboring the Dalton Boys finally gets paroled. Upon his release, the outlaw band tries to entangle him in another scheme, but he refuses to join them. One day the train he rides gets held up and afterward he is accused of the crime. In desperation, the man escapes and reunites with the Daltons, gets in a bloody battle, and then hides out on the ranch they commandeered. While there, he falls for the rancher's daughter. He swears to her that he will do one last job with the Daltons and then he and she will run away. Unfortunately, the gang is caught and the man returns to prison. Fortunately, his girl will wait for his release.

William Reynolds
as Will Dalton

Critic Reviews for The Cimarron Kid

Neither the script nor Budd Boetticher's direction asks much of the players.

Murphy who showed a decent talent for acting in the recent Red Badge of Courage is all the way back where he began in his latest performance.

Better known for his psychological westerns, Budd Boetticher handles this programme filler with intelligent efficiency, drawing a thoughtful performance from Murphy, with whom he would reunite for the star's swansong, A Time for Dying.

Brilliant scene where Murphy and friends escape through a rail yard.

There are no featured reviews for The Cimarron Kid at this time.