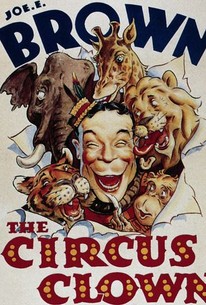 Joe E. Brown plays a dual role in Circus Clown, as would-be circus entertainer Happy Howard and his rustic old father. When dad, a former circus man himself, disapproves of Happy hitting the sawdust trail, the boy does so anyway, smitten by a beautiful female bareback rider. So naïve is our hero that he doesn't realize that the "girl" is actually female impersonator Jack (Don Dillaway), who strings Happy along just for laughs. Once this plotline is straightened out, Happy becomes the hero of the day by substituting for a drunken aerialist -- and there is no more proud or enthusiast spectator than Happy's happy dad. If Joe E. Brown looks genuinely frightened in his scene in the lion's cage, he should; the lion affectionately pawed Brown during one take, resulting in six stitches in the comedian's arm. More serious than most Brown vehicles, Circus Clown is distinguished by the star's spectacular acrobatics (the real thing -- no doubles), and by some excellent split-screen work during the "father/son" scenes. ~ Hal Erickson, Rovi

Poodles Hanneford
as Himself (uncredited)

William B. Davidson
View All

Critic Reviews for The Circus Clown

There are only a limited number of things that can happen in a circus picture... They all happen in The Circus Clown, which won't either surprise or disappoint you in any particular.

At best only a fair circus comedy.

There are no featured reviews for The Circus Clown at this time.