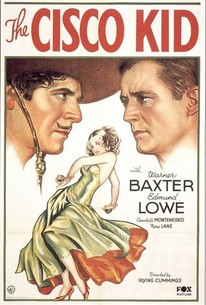 The Cisco Kid was to have been the sequel to the pioneering 1929 talkie In Old Arizona, with Warner Baxter repeating his Oscar-winning role as "O. Henry's Robin Hood of the Old West". Unfortunately, Fox Studios temporarily lost the rights to the Cisco Kid character, thus Baxter was starred as Cisco-in-name-only in The Arizona Kid. The rights were then reclaimed, and The Cisco Kid went into production as the third in the Baxter series -- and, by all accounts, the best of the trio, beautifully photographed and blessed with a thrilling musical score. Running just under an hour, the film finds good-hearted Cisco robbing a bank to save pretty widow Sally Benton (Nora Lane) from losing her ranch. Developing a strong affection for the widow's two children, Cisco risks arrest when he mistakenly believes that one of the kids has been injured. The hero's "friendly enemy" Sgt. Mickey Dunn (Edmund Lowe, likewise a carry-over from In Old Arizona) is so touched by this display of devotion that he "accidentally" allows Cisco to escape to new adventures.

Critic Reviews for The Cisco Kid

There are no critic reviews yet for The Cisco Kid. Keep checking Rotten Tomatoes for updates!

There are no featured reviews for The Cisco Kid at this time.