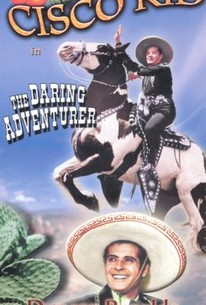 After several years' dormancy, the "Cisco Kid" western-film series returned to the screen with Monogram's The Cisco Kid Returns. Duncan Renaldo, actually Rumanian, starred as the Mexican "Robin Hood of the Old West", with Martin Garralaga as his corpulent sidekick Pancho. In the tradition of 20th Century-Fox's earlier "Cisco" efforts, our hero comes to the aid of an orphaned child, clears himself of a kidnapping charge, and proves that a "solid citizen" is in fact a criminal mastermind. After a trio of Cisco Kid films, Renaldo left the series, to be replaced by Gilbert Roland; but when time came in 1950 for a Cisco Kid TV series, Renaldo was back in the saddle again, this time with Leo Carrillo as Pancho.

Emmett Lynn
as Sheriff
View All

Critic Reviews for The Cisco Kid Returns (The Daring Adventurer)

There are no critic reviews yet for The Cisco Kid Returns (The Daring Adventurer). Keep checking Rotten Tomatoes for updates!

There are no featured reviews for The Cisco Kid Returns (The Daring Adventurer) at this time.