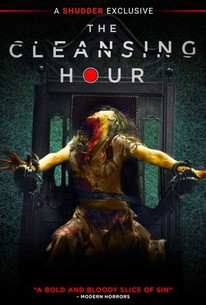 Max and Drew run a popular webcast that streams "live exorcisms" watched by millions across the globe. In reality, the exorcisms are just elaborately staged hoaxes performed by paid actors. But their fortunes take a turn when one of the actors becomes possessed by an actual demon and takes the crew hostage. In front of a rapidly growing audience, the demon subjects the crew to a series of violent challenges, threatening to expose the dark secrets they've been hiding from each other unless they come clean and reveal they're impostors before the show is over.

Jynarra Brinson
as Desiree
View All

News & Interviews for The Cleansing Hour

View All The Cleansing Hour News

Critic Reviews for The Cleansing Hour

A film that is fun, frightening, and smugly surprising, especially as it strides smoothly into a final beat that will leave you drop-jawed.

It's admirable just how much the film runs with its concept and takes it through original, and often hysterical, twists and turns.

A well-conceived, well-executed horror movie... a worthy entry in both the exorcism and Internet subgenres.

Since demons don't necessarily stand out in Hell, some of them crave the spotlight just as much as us insecure humans do.

The Cleansing Hour isn't awful, but if you were asked to come up with a genuinely positive thing to say about it, even the most forgiving of souls will find themselves coming up short.

...a lamentable misfire that probably, one would assume, worked much better as a 19 minute short.

Most horror fans have seen more than enough possession stories by now, so it's a good thing this quick and creative chiller has a few new wrinkles to throw our way.

The social media angle is instantly dated and yet the film still feels tediously beholden to generic tropes.

'The Cleansing Hour' exorcises an overdone horror subgenre of its staleness in an exceptionally entertaining spectacle of profiteering prophets and merciless hoofed tormentors.

...about as subtle as a brick...if you let the film tempt you, then you're in for a good time.

There are no featured reviews for The Cleansing Hour at this time.