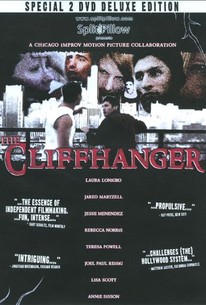 An exquisite corpse-style drama about intersecting lives, The Cliffhanger is a result of the collaborative efforts of 18 Chicago actors and 11 improvisational production teams based in the Windy City. When Iris Peterson checks into a rundown hotel, her presence sets into motion a bizarre sequence of events that will test the resolve of four lost souls -- herself included. As Anthony fights to prevent his brother Darius from making the same mistakes that he did, desperate Nellie prepares to make a clean, albeit painful, break from the past. Redemption won't come easy to Iris, Anthony, Darius, and Nellie, but should they manage to endure the struggle, at least they'll have a fighting chance.

Critic Reviews for The Cliffhanger

There are no critic reviews yet for The Cliffhanger. Keep checking Rotten Tomatoes for updates!

There are no featured reviews for The Cliffhanger at this time.