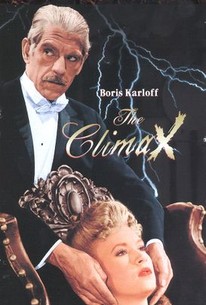 The Climax was hurriedly and economically filmed on leftover sets from Universal's super-production The Phantom of the Opera. In his Technicolor debut, Boris Karloff plays Dr. Hohner, a brilliant but unstable theatrical physician who murders a beautiful opera star when she rejects him. Ten year later, a beautiful young opera singer named Angela (Susannah Foster) makes her debut at the Royal Opera House. Convinced that Angela is the reincarnation of his murdered sweetheart, Dr. Hohner fiendishly hypnotizes the girl so that she will be unable to sing. The spell is broken by the combined efforts of Angela's boyfriend Franz (Turhan Bey) and an opera-loving "boy king" (Scotty Beckett). As for Hohner, well, what usually happens to Boris Karloff in films of this nature?

Critic Reviews for The Climax

The movie earned an Oscar nomination for Best Color Art Direction-Interior Decoration, an amusing fact since the exact same set (and same four artisans) won the Oscar in that category the previous year for its use in Universal's The Phantom of the Opera.

The combination of opera and drama is interesting. [Full review in Spanish]

The dullest horror film to ever come from Universal.

Audience Reviews for The Climax

The story sounds cool, and the movie is pretty good most of the time, but then you realize that the main character's obsession with not wanting to hear anyone sing that song again, but still wanting to work at the opera, isn't practical, but it's predictable.