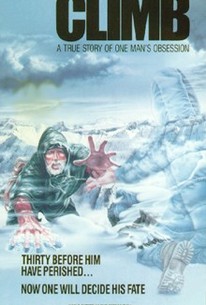 Climb is an authentic-looking reenactment of a treacherous 1953 mountain-climbing expedition. Dr. Karl Herrligkoffer (James Hurdle), whose half-brother was killed in 1932 while attempting to scale the 26,000-foot Himalayan peak Nanga Parbar, leads a German/Austrian expedition up the same mountain two decades later. Herrligkoffer's volatile partner in this mission is headstrong mountaineer Herman Buhl (Bruce Greenwood). The film is as much a story about the conflict of temperaments between Herrligkoffer and Buhl as it is about the climb itself. Donald Shebib wrote and directed this Canadian-made "open air" adventure.

Critic Reviews for The Climb

There are no critic reviews yet for The Climb. Keep checking Rotten Tomatoes for updates!

There are no featured reviews for The Climb at this time.