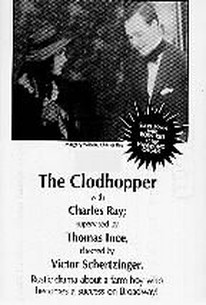 In one of his most successful film appearances, "All-American Boy" Charles Ray starred as put-upon farm boy Everett Nelson. Despite the fact that he is proven his worth time and again, Everett is mistreated and misunderstood by his fellow villagers, mainly because his father Ike (Charles K. French) is the meanest and stingiest man in town. Escaping to the Big City, Everett becomes a popular musical-comedy dancer under the watchful eye of Broadway entrepreneur Karl Seligman (Thomas Guise). Returning home in triumph, our hero puts his father and his tormenters in their place, and wins the heart of heroine Mary Martin (Margery Wilson). Repetitious and predictable though it may be, The Clodhopper was a huge moneymaker, a fact reflected by Charles Ray's decision to virtually remake the picture as 1926's Sweet Adeline.

Critic Reviews for The Clodhopper

There are no critic reviews yet for The Clodhopper. Keep checking Rotten Tomatoes for updates!

There are no featured reviews for The Clodhopper at this time.