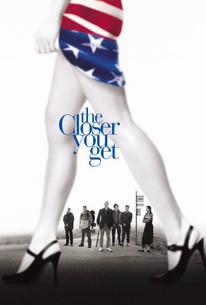 The Closer You Get Photos

In a small Irish village where herding sheep is still one of the major industries, the largely male, unmarried population has grown dissatisfied with their lot in life; when a shipping error sends the wrong film to the local movie house, the citizens are treated to a racy item from the United States. The movie is cut short by the village priest, but it plants an idea in a few of the men: America is overflowing with beautiful women, so why not get a few of them to come to Ireland? Pooling their resources, a group of men places personal ads in an American newspaper in hopes of luring a few ladies away from life in the States for the more rustic pleasures of the Irish countryside. The debut film from director Aileen Ritchie, The Closer You Get stars Niamh Cusack, Ian Hart, Sean McGinley, and Ruth McCabe. ~ Mark Deming, Rovi

Critic Reviews for The Closer You Get

It's a sweet film, mildly pleasant to watch, but it's not worth the trip or even a detour.

A harmlessly amusing comedy about the pursuit of love in a tiny Irish community.

This small, quaint comedy offers up a half-baked fantasy in a lush back-village setting. It's an amiable, unremarkable 92 minutes of wacky, dimwitted characters.

overall, gets by as mediocre.

The admittedly good-spirited story rambles like a guy telling a long joke that doesn't have a punch line.

Audience Reviews for The Closer You Get

Also called "American Women". Delightful! Fun. Sweet film from Ireland. A great story about "the grass is always greener", and what lengths people will go to for love. Really enjoyed....

The Closer You Get Quotes