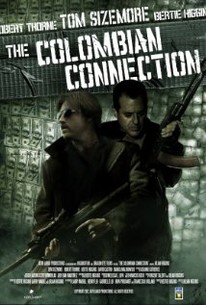 The year is 1976 and it is a dangerous year in the Straits of Yucatan. The man is Jack Hooks, a former cop set up by his corrupt partner and sent to jail for a drug crime he didn't commit. After being yanked out of prison with an early release deal offered by the DEA, he is sent on a do or die mission bring down the drug trade of his former partner, Frank Rossi and his contacts. Hooks has no choice but to plunge into the underworld of marijuana smuggling by making one big run through the narrow channel that flows between Cuba and Mexico, also known as "The Eye", and into the heart of a violent Colombian drug ring. At the head of the ring is Carlos Huerta, the ruthless drug lord that is Rossi's source of supply, and Jack's final objective. That is, if he can escape the jungles of Colombia before his clandestine relationship with Elena, Huerta's young courtesan is discovered and threatens the lives of himself, his crew and his freedom.

Critic Reviews for The Colombian Connection

There are no critic reviews yet for The Colombian Connection. Keep checking Rotten Tomatoes for updates!

There are no featured reviews for The Colombian Connection at this time.