The Colossus of New York1958 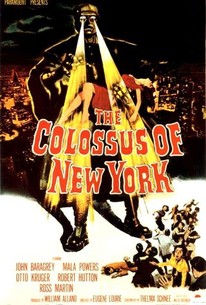 The Colossus of New York Photos

This low-budget, Frankenstein-flavored sci-fi flick involves the transplantation of a dead scientist's brain into the body of a hulking, glowing-eyed, caped robot by the man's lunatic brother. Though initially a success, the operation soon goes horribly wrong as the robot begins to display increasingly homicidal behavior, zapping people with its gamma-ray eyes. The climax comes when the robot begins a murderous rampage in the United Nations. The only hope for stopping the monster comes from the late scientist's young son, who manages to reach what little of the scientist's identity still remains and calms the robot down. This is actually a well-written film with a strong emotional core and a fairly sympathetic monster, but it loses some ground thanks to the rather silly rivet-headed robot costume. ~ Cavett Binion, Rovi

Ed Wolff
as The Colossus
View All

Critic Reviews for The Colossus of New York

In the climactic scene, the juxtaposition of the robot with the death rays, the dead bodies and the Bible quote on the wall adds up to something quite fascinating and powerful.

Audience Reviews for The Colossus of New York

There are no featured audience reviews yet. Click the link below to see what others say about The Colossus of New York!

The Colossus of New York Quotes