The Colossus of Rhodes1961 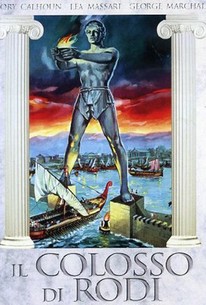 The Colossus of Rhodes Photos

Critic Reviews for The Colossus of Rhodes

In spite of beautiful settings, the picture has little excitement and the romance is unromantic.

It was a film remarkable enough, at a time when the peplums had just about reached the end of their particular line, to warrant good notices for its crowd and spectacle scenes.

What a place! For that matter, what a picture!

A costume epic well-served by Leone's previous experience with the genre.

It's not that any of this is specifically and irredeemably bad. It's just that none of it is very much good.

...Leone's first credited film as a director, and it shows clearly the course he was charting as a filmmaker.

This ludicrous costume epic complete with hambone acting is interesting to film buffs because it is an early work by the king of the spaghetti Westerns, director Sergio Leone.

The translated script may be ropey and some of the acting doesn't quite cut it but it's hard not to get swept along with the lavish set pieces (the earthquake sequence stands out.

Audience Reviews for The Colossus of Rhodes

This grandiose epic directed by Sergio Leone - his first film before he went on to perfect his craft with his well-known Spaghetti Westerns - relies mostly on its stunning visuals, complete with dazzling sets and costumes, and also features some nice action scenes.

We all have to start somewhere, and this is where Sergio Leone kicked off his directorial career. It's an epic scale swords and sandals type of affair that feels more like a campy/kitschy version of the lavish Hollywood Biblical epics from the previous decades than what Leone would produce a few years later. Yeah, it doesn't really fit in all that well with the rest of his work, and I get the feeling that he treated this as "just a gig", but it's still kind of fun, enjoyable, and has some decent moments. Actually, the whole movie is pretty much just that: a strung together set of moments and set pieces that feel pretty jumbled, and not very cohesive. There's not much of a strong narrative. Instead, we get a laundry list of everything you'd expect from a movie like this: conniving schemers, lots of slave torture and an eventual slave revolt, stadium fights, and the titular statue being awesome and destroying lots of stuff. Yeah, this sounds really nutty and goofy, but it is fun. It's not a great movie, and it is overlong, but it is a fascinating look at Leone's beginnings.

A reasonably hammy sword and sandals epic. If Sergio Leone didn't direct I probably wouldn't have bothered, but you can see the small rays of light that would ultimately make up Leone's style. If you're a fan of his I recommend seeing it.

The Colossus of Rhodes Quotes