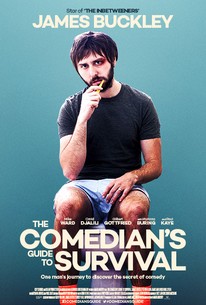 The Comedian's Guide to Survival Photos

Struggling comedian James Mullinger comes to a crossroads in his life; no one wants to see him perform, his wife is fed up, and his day time boss has given him an ultimatum - take a promotion and never do stand up again, or stick to the comedy and lose his job. To add salt to the wound, his boss, the editor of COQ, wants him to interview the greatest comedians in the UK and North America for an upcoming comedy special. The recollecting of his worst performances and the disasters that followed, James analyses where it all went wrong, and finds himself steering the interviews to his own interests, rather than that of the magazine's. Through spending time with his former heroes, a faint glimmer of his passion for comedy that once stirred within begins to emerge.

Critic Reviews for The Comedian's Guide to Survival

Episodic and unfocused, the film meanders before deploying a highly unconvincing scene of long-awaited comic success.

The Comedian's Guide to Survival is far funnier than it has any right to be.

Best guide to survival? Avoidance, at all costs.

The film rarely rings true, and there are very few laughs along the way.

Balancing selfishness with self-deprecation, Buckley makes for a pitiful but ultimately likeable lead, well-supported by co-stars and cameos.

Audience Reviews for The Comedian's Guide to Survival

There are no featured audience reviews yet. Click the link below to see what others say about The Comedian's Guide to Survival!

The Comedian's Guide to Survival Quotes