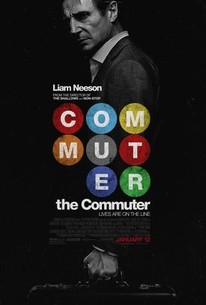 Critics Consensus: The Commuter's cast is better than its workmanlike script - which helps make this reasonably diverting Liam Neeson action thriller worth the price of a matinee ticket or rental, if not a full-price ticket.

Critics Consensus: The Commuter's cast is better than its workmanlike script - which helps make this reasonably diverting Liam Neeson action thriller worth the price of a matinee ticket or rental, if not a full-price ticket.

Critic Consensus: The Commuter's cast is better than its workmanlike script - which helps make this reasonably diverting Liam Neeson action thriller worth the price of a matinee ticket or rental, if not a full-price ticket.

In this action-packed thriller, Liam Neeson is Michael, an insurance salesman, whose daily commute home quickly becomes anything but routine. After being confronted by a mysterious stranger (Vera Farmiga), Michael is blackmailed into finding the identity of a passenger on his train before the last stop. As he works against the clock to solve the puzzle, Michael is unwittingly caught up in a criminal conspiracy that carries life and death stakes for himself and his fellow passengers.

Pat Kiernan
as as Himself

Natalie Duddridge
as as Herself

News & Interviews for The Commuter

New On DVD in April: Paddington 2, Phantom Thread, The Post and More
Box Office: Game Not Over for Jumanji Which Smashes $750M Global
Box Office: Jumanji Tramples The Competition Again

View All The Commuter News

Critic Reviews for The Commuter

The film is hobbled by sloppy camera work, ludicrous fight scenes, hairbreadth escapes, and altogether too many suspects.

The whole big thing is, 'Here's the setup, here's the rules.' And then literally 20, 25 minutes in, the film goes, 'I can't be bothered with that.'

An enjoyable, pulpy thrill ride that rises above the usual gamut of throwaway early year thriller releases, The Commuter is made all the more interesting by exciting, creative work behind the camera from Collet-Serra.

The real star is editor Nicholas De Toth, whose breakneck pacing, combined with Neeson's growling charisma, allows us to forget that not much in The Commuter makes a lick of sense.

All of the elements are there for stylish and suspenseful flick, but the suspense seems to have been forgotten.

It's hard not to derive some pleasure from watching Neeson fling himself about a rickety commuter train (and, in one set piece, precariously close to some train tracks), throwing insults at Goldman Sachs "on behalf of the American middle class".

There's a good but underutilized cast, a promising premise that's undercut by a dour tone, and not enough action to justify the weak story.

The Commuter uses female characters as nothing more than plot accessories.

Seeing [Neeson] barrel roll out of the way of an oncoming train and jumping onto a moving train is laughable at this point, but never less than entertaining.

Liam Neeson certainly knows how to play the everyman with a special set of skills but he's done it before and better in other movies.

Neeson remains thoroughly engaging, capably bringing the audience into his frantic scenario of heedlessness and abandon.

You don't have to be a dad to enjoy the visceral thrills of a Liam Neeson action movie, but it certainly helps if you suffer from the same American middle class insecurities as The Commuter's Michael.

Audience Reviews for The Commuter

Again Neeson is a man in a desperate situation who soon teaches his tormentors that he is not to be messed with. His character is somewhat more realistic than in some of the similar thrillers before, but several parts of the film require quite some suspension of disbelief. The film uses its limited setting well enough for things not to get boring, of course even the trailer had to give away that there is a crash in the end. Some of the supposed twists are not particularly surprising, but the film is entertaining enough not to make you regret being along for the ride.

So boring and so many dumb action scenes.

Collet-Serra is back with another run-of-the-mill Liam Neeson action movie (the fourth), but this time there is very little to entertain here besides his usual show-off gimmicks, being basically a sillier and less creative version of Non-Stop but on a train instead of an airplane.